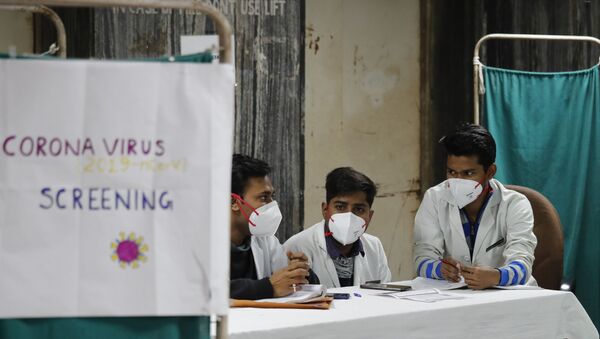 Ekaterina Blinova
All materialsWrite to the author
Until recently, India has managed to keep the COVID-19 outbreak under control, but since cases started rising steadily in mid-March, the government has been mulling over further steps. Indian commentators have assessed New Delhi's coronavirus response and shed light on the country's potential to curb the crisis.

India may extend its 21-day lockdown amid the coronavirus pandemic as Prime Minister Narendra Modi has called a new meeting of all chief ministers on 11 April to decide whether to proceed with the measure beyond 14 April.

Had an in-depth interaction with leaders of various political parties earlier today. Leaders shared their views on tackling COVID-19 and the way ahead. https://t.co/XoDKj52MoW

​On 9 April, the Indian Ministry of Health and Family Welfare reported about 591 new COVID-19 cases with the total number of those testing positive for coronavirus has climbed to 5,865.

According to Amrita Dhillon, an Indian foreign affairs analyst and Founding Editor of The Kootneeti, a New Delhi-based publication, the situation remains largely under control as the government "is handling the coronavirus crisis in very calculated steps".

"Understanding the threat, the government is doing its best," she says. "However, looking at the level of population India has, it is rigorous to fight such a large-scale pandemic, even with a three-month safe time. There are almost 1.35 Billion people in India, out of which 70 percent live in rural areas, where communication loss is very much expected."

She highlights that the government is also trying its best to prevent the shortage of equipment as the number of infected keeps rising. "India has imported it from China and expects the world to fight this battle together," the analyst notes.

​Suvam Pal, a Beijing-based Indian media professional and author, echoes Dhillon by saying that so far India has handled the crisis "quite good", responding to the beginning of the outbreak in a timely manner.

"In fact, India’s health ministry issued an advisory for its travellers to Wuhan and China as early as on 17 January," he says. "Soon after China’s decision to put Wuhan and Hubei under lockdown on 23 January, India prohibited the export of masks, PPEs and other essential medical equipment in order to keep itself prepared for any possible health emergency in the country due to the coronavirus outbreak in China."

He recollects that the country reported its first case on 31 January when an Indian student returned home from Wuhan and tested positive in the southern Indian state of Kerala, while the first COVID-19 death was reported on March 12. "Things have substantially changed in the second half of March and is getting a bit alarming even though its' not so dangerous."

Pal notes, however, that while "guarding its soil well from any spread from the east" by banning travellers from China, Japan, and South Korea, India has seemingly underestimated the challenge mounting in the West – from the Middle East and Europe. According to him, it was travellers from the Middle East who could have contributed to a sharp rise in the numbers in early March.

"At that time, India also made a grave mistake by putting only Italy in its priority screening list while leaving the rest of the borderless Schengen zone relatively unguarded," the author suggests.

However, he highlights that "the government’s 21-day lockdown decision on March 24, however, came just at the right time and is certainly going to help significantly in breaking the chain and flattening the curve".

Delhi: Shops remain closed in the Bengali Market area, as the area has been sealed following the orders of Delhi Govt under the containment plan to prevent the spread of #COVID19. The area has been cordoned off by Delhi Police to prevent movement of people. pic.twitter.com/mtMomncNDI

​How Lockdown Affects the People and Economy

Still, as Amrita Dhillon points out, "self-isolation has a different meaning for different sections of society" in India.

"It carries a different meaning for people living in their luxury apartments and is different for the people in Indian slums, where they share toilets and live in a very confined space," she says. "And such people are the wheels of the Indian economy. The rural workforce is always considered as the one working behind the curtains."

She notes that the pandemic has forced a huge number of Indians to return to their villages, leaving the big cities behind. This workforce exodus has had a negative impact on the manufacturing and processing sectors in India, while the tourism and entertainment industries are "almost dead", according to the analyst.

Dhillon says that according to some estimates, around 100 million people are expected be hit by the decline in economic activity amid the lockdown. "In a fatal blow, the Indian economy has been isolated and it will only get to normal after the coronavirus crisis ends and the workforce returns", she observes.

Under these circumstances, the Indian government tried their best to save the economy, but the lives of Indians are the highest priority, the analyst highlights.

"Reserve Bank of India has also taken some measures to keep the economy running," Dhillon continues. "It allowed banks to put their EMI on hold for the next three months and also cut its interest rates to encourage banks to put more money into productive sectors. It also reduced the cash reserve ratio to a seven-year minimum, which will enable approximately $18 Billions to flow through the banking system".

However, Suvam Pal expects that the country's economy "is bound to feel the pinch even though the government and the Reserve Bank of India have announced a few preventive measures and [try] to keep the economy afloat".

"The struggling job sector is likely to further shrink and that can be really alarming for a country where unemployment has always been a prime issue in both state and national elections", the journalist warns. "The already volatile banking sector is staring at a larger crisis while the manufacturing sector is under pressure to meet the demand of the corona-hit crisis economy."

However, there is silver lining to the pandemic as it may boost India's "medical, engineering and scientific research sectors as the country can unleash its vast pool of scientific brains and innovators to cater to  global demand after the catastrophic crisis is over", the author believes. 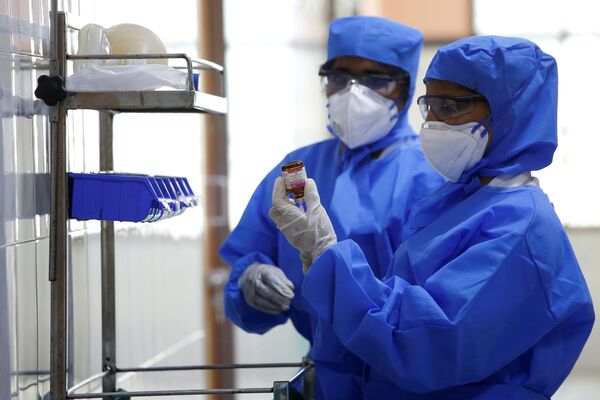 FILE PHOTO: Medical staff with protective clothing are seen inside a ward specialised in receiving any person who may have been infected with coronavirus, at the Rajiv Ghandhi Government General hospital in Chennai, India, January 29, 2020.
© REUTERS / P. Ravikumar

Indian pharmaceutical producers are not sitting on their hands as the COVID-19 outbreak has put the industry on high alert. According to the Indian government's official website, the country ranks third in the world for pharmaceutical production by volume and 13th by value.

About 30 countries, including the US, have recently requested that New Delhi provide supplies of an anti-malaria drug, Hydroxychloroquine, regarded as a treatment for COVID-19, after the Modi government agreed to lift the ban on export of the much-needed medicine.

Meanwhile, Indian biotechnological company Bharat Biotech is developing and testing a vaccine against coronavirus called CoroFlu together with international virologists. The country's pharma producers Zydus Cadila and Serum Institute are also hunting for a COVID-19 vaccine, according to India Today.

"As the crisis looming, every Indian is looking for a satisfactory answer on the vaccines, but if we believe the experts in India and across the globe, there are no signs of vaccines by the end of the year 2020, notes Amrita Dhillon.

Suvam Pal echoes the analyst: though some Indian biotech firms have started to carry out animal tests "the vaccine research is a lengthy process and has to pass several stages before it goes into the market".

He points out that "even though government funding may not be substantial, many corporates are ready to pitch in" and pump money into the vaccine research "as per their diversification strategies".

"Puna-based world’s leading vaccine manufacturer Serum Institute of India (SII) has already got into collaboration mode by striking a partnership with US biotechnology firm Codagenix", he stresses. "They have already claimed to have got into the animal trial phase and is racing against time to get ready with the vaccine by 2022."

In addition, India has already kicked off manufacturing of low-cost testing kits and other essential medical equipment, including cost-effective PPEs and thermal guns.

"Indian pharmaceutical companies have already made a name for producing cost-effective vaccines and drugs in the past and I am quite optimistic that they will pull it off once again," Pal concludes.