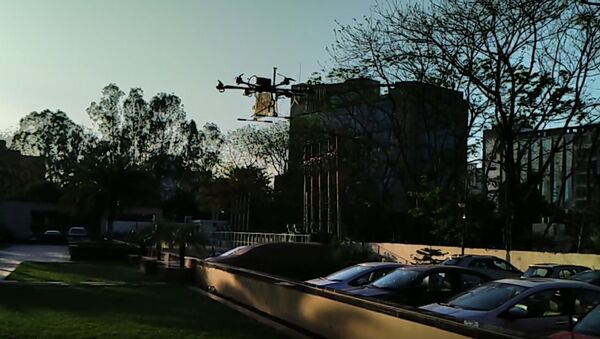 New Delhi (Sputnik): India has been under a nationwide lockdown since 25 March to prevent the spread of coronavirus, and the police have enforced strict surveillance to monitor violations.

The Delhi Police have deployed drones for surveillance of the city, which stretches over 21,200 square miles, in order to  monitor those who defy the lock-down conditions.

Suvashis Choudhary, Joint Commissioner of Police in Delhi shared footage of the city shot by an unmanned aerial vehicle (UAV) which confirmed that Delhi Police was using drone-based surveillance techniques in the huge national capital region that stretches across 21,229 square miles.

​In a bid to make sure people coming out of their houses to purchase essential goods like food and medicines were practicing social distancing, police forces in other Indian cities in states including Uttar Pradesh, Madhya Pradesh and Bihar among others have also been relying on drones.

Videos of deserted Indian roads and buildings recorded by these surveillance UAVs are now beginning to make rthe ounds on social media.

​Along with surveillance, India is also using the drones to sanitize congested areas and public places in Indian cities.

​Milind Raj, a Lucknow-based scientist who is designing drones for city-wide disinfecting processes told Sputnik that the technology is 50 times more effective for monitoring the cities and sanitizing them. Raj revealed that after China, India is now the second country in the world to adopt this use of the technology.

​Raj, however did note some instructions for officers using drones in cities in India.

“Drone pilots should not fly over any human or animal. For a spray, I would recommend not to fly over 20 meters high. It is indeed a big responsibility to operate these machines without damaging people, animals or properties,” the scientist said.

In addition, Raj also highlighted that implementation of laws on drone pilots must be on the priority list of Indian lawmakers. He noted that the technology should not be subjected to misuse.

As of now, no instance of a drone-based accident has come to the public eye in India.

So far 199 people have lost their lives to COVID-19 infection, while there have been 5709 confirmed cases in the country so far, according to the federal Health Ministry.