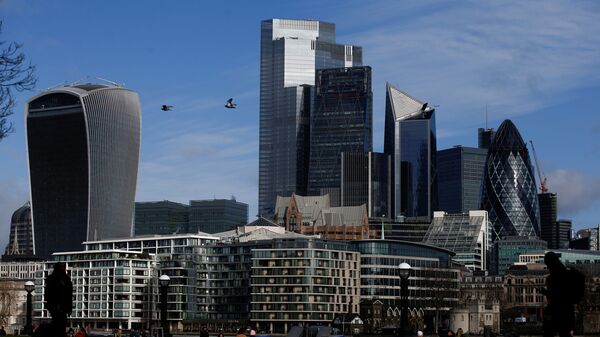 Ilya Tsukanov
All materialsWrite to the author
On Wednesday, the Financial Times reported that the UK may be headed toward one of its worst recessions in over a century amid collapsed consumer demand and the shuttering of business activity as a result of the ongoing COVID-19 pandemic.

The UK’s economic numbers were headed toward recession (i.e. a fall in GDP in two successive quarters) even before London took stringent measures against the new coronavirus which sent economic activity plunging, GDP figures from the UK's Office of National Statistics reveal.

According to the data, GDP growth slowed to just 0.1 percent in January, falling to -0.10 percent a month later, effectively wiping out the modest +0.20 percent gains from December 2019 following a 0.3 percent drop in November.

The February decline included a fall in construction activity, accounted for by poor weather and flooding, with total production said to have fallen by 0.6 percent in the three months to February, led by a 0.4 percent decline in manufacturing. The services sector enjoyed modest growth during the same period, but is expected to suffer a major decline once the figures for March are released.

Bloomberg believes a first quarter drop in GDP is growing increasingly likely, with the UK’s construction sector reporting its sharpest drop since the 2008 financial crisis and the single largest monthly decline on record in figures released earlier this week.

Pantheon Macroeconomics UK chief economist Samuel Tombs told Sky News that the country’s GDP may drop by some 20 percent during the lockdown over a three month period, for an overall decline of 15 percent in Q2 (April through June). A gradual uptick is expected thereafter, although market confidence and employment aren’t expected to reach their pre-pandemic levels for at least the remainder of the year.

On Wednesday, the Financial Times warned that the COVID-19-related recession is likely to be “deeper than the 2009 financial crisis and one of the most severe since 1900,” given the collapse in consumer demand, the closure and/or significant reduction in business activity, a drop in electricity use, transportation, rising jobless rates, a slide in consumer spending, and a drop in new home sales.