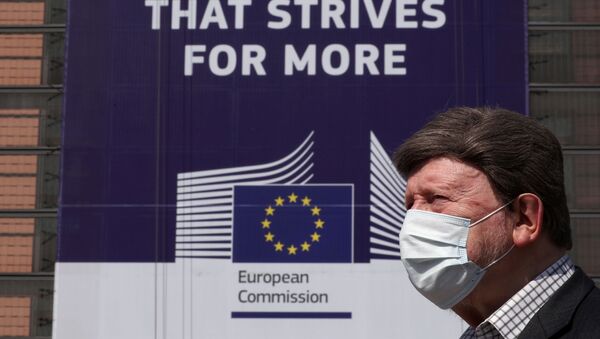 MOSCOW (Sputnik) – The Eurogroup acknowledged that it has agreed to work on a temporary Recovery Fund to tackle the economic consequences of the coronavirus (COVID-19) pandemic for the bloc.

"We also agreed to work on a Recovery Fund to prepare and support the recovery, providing funding through the EU budget to programmes designed to kick-start the economy in line with European priorities and ensuring EU solidarity with the most affected member states. Such a fund would be temporary, targeted and commensurate with the extraordinary costs of the current crisis and help spread them over time through appropriate financing," the Eurogroup stated late Thursday.

According to the Eurogroup, the next EU Multiannual Financial Framework (MFF) will play a central role in the EU's economic recovery from the pandemic.

"It will have to reflect the impact of this crisis and the size of the challenges ahead, by setting the right priorities, to allow Member States to effectively address the fallout of the coronavirus crisis, to support the economic recovery, and ensure that cohesion within the Union is maintained through solidarity, fairness and responsibility. We welcome the Commission’s intention to adapt its MFF proposal to reflect the new situation and outlook," the statement said.

The Eurogroup added that member states have agreed to provide those worst-hit sectors and businesses with liquidity support consisting of public guarantee schemes and deferred tax payments, which now stand at 16 percent of the bloc's GDP, up from 10 percent on 16 March.

Earlier in the day, French Economy Minister Bruno Le Maire said that EU ministers had agreed to a 500 billion euro ($546.6 billion) aid package to address the economic fallout of the pandemic.

"An excellent agreement of European finance ministers on the economic response to coronavirus: 500 billion euros will be made available immediately. A recovery fund to come," Le Maire tweeted on Thursday.

EU nations had been at loggerheads over whether bailout funding should come with strings attached. Italy and Spain, the countries affected the most by the health crisis, argued they should not be made responsible for the economic fallout of the pandemic.

Eurogroup President Mario Centeno said during a press conference that the ministers had agreed on "bold and ambitious proposals" that were unthinkable a few weeks ago.

Centeno said they would create three safety nets for businesses, workers and countries. A temporary financial institute will be created to channel up to 100 billion euros to countries struggling to protect jobs. A 200-billion scheme will lend money to small- and medium-sized businesses. A mechanism worth 240 billion will be launched within two weeks to support Eurogroup ESM members.

Centeno added that some member states have proposed common debt issuance to achieve these goals. He said the next EU budget would play a key role in funding the coronavirus response.