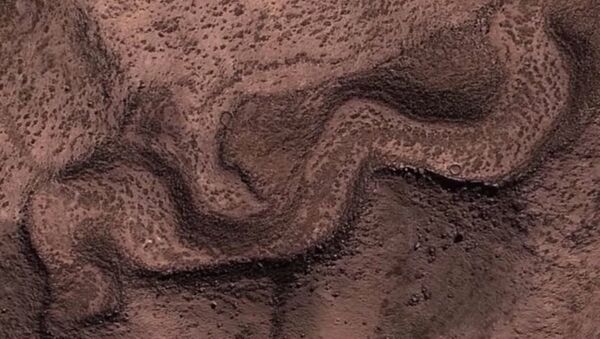 Southern Peru is famous for UNESCO-designated World Heritage Site the Nazca Lines, which represent a group of giant and ancient geoglyphs. However, something even more mysterious and unexplainable have now been spotted close to the site by one curious Google Earth user.

Some cryptic shapes and patterns were spotted by Google Earth enthusiast 30-40 kilometres North East from the famous Nazca Lines in Peru. The user published a video of his mysterious discovery on YouTube, and the image immediately attracted thousands of views in just several days, with observers rushing to express their astonishment with the finding.

The patterns spotted by the Google Earth admirer included strange “football pitch”-sized circles in a deserted mountain ridge nearby Uchumarca, as well as a cryptic snake-like structure, which he described as a “serpent”. He also noted in the video that it was difficult to understand whether the pattern was occurring naturally or was a human-designed structure.

“The ‘serpent’ just really jumped right out at me”, the Google Earth user wrote on YouTube after his video was published. “It's either a very large natural formation or a manmade artificial site like the serpent mound in Ohio. Other than that - I got nothin'. Very interesting”.

“Very cool find my friend. Definitely looks like a petrified serpant to me”, one of the video viewers commented on the finding.

“Yo that snake was so eye popping, it def looks man made but the scale of it, im amazed by it”, another YouTuber added.

Giant Stringy UFO-Like Marine Creature Captured on Video Near Western Australian Coast
Despite a flow of comments and speculations about what could have caused such exotic shapes in one of the highest elevations in the area, the truth behind the origin of giant patterns still remains a mystery.

The Nazca Lines, which lie close to the analysed site, are a group of geoglyphs which are believed to be created around 2000 years ago. They are located in southern Peru and are designated as a UNESCO World Heritage Site.