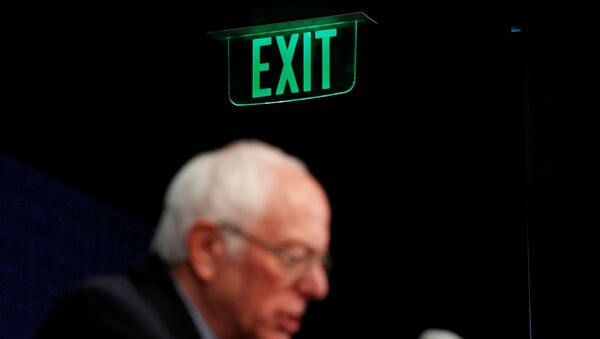 Democratic Senator Bernie Sanders dropped out of the US presidential race, leaving Joe Biden as the only Dem candidate to take part in the 2020 US presidential election.

Former Hillary Clinton staffers have reportedly received an email invitation to a Zoom meeting to celebrate Sen. Bernie Sanders' campaign ending, according to BuzzFeed News. The e-mail was named “Invitation: Bye, bye Bernard (HFA celebration toast),” where HFA is for "Hillary for America".

“He’s finally gone (again!). Join for a celebratory toast if you can! And yes, you can loop :)”, the email read as quoted by BuzzFeed News.

The email contained a link to a Zoom meeting scheduled for 4 p.m., but was then reportedly renamed “HFA end of primary celebration toast” without any mention of Sanders. Shortly after, according to BuzzFeed, the meeting was cancelled.

Clinton, who was Sanders' opponent in 2016 Democratic primaries, slammed him earlier in a January documentary about her, calling Sanders a "career politician".

“Nobody likes him, nobody wants to work with him, he got nothing done. He was a career politician,”, she said. “It’s all just baloney and I feel so bad that people got sucked into it.” she reportedly said.

Sander's responded to criticism in January, stressing that it is important to unite a party which had been dramatically split after the 2016 primary.

"I mean, this is not the kind of rhetoric that we need right now when we are trying to bring the Democratic Party together to defeat the most dangerous president in American history", Sanders noted.

Sanders suspended his presidential bid on Wednesday via a Periscope livestream, saying that he "cannot in good conscience continue to mount a campaign that cannot win and which would interfere with the important work required of all of us in this difficult hour".