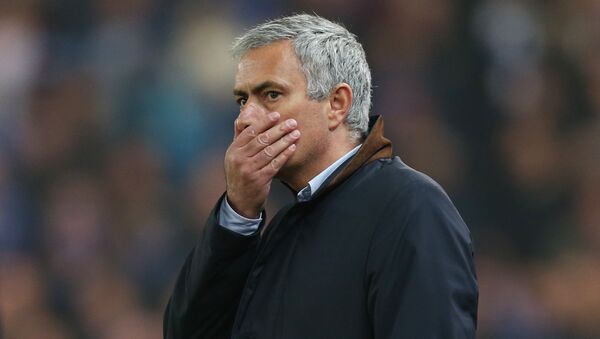 © REUTERS / Action Images via Reuters / Alex Morton Livepic
Subscribe
As we have recently found out, staying within four walls is quite a challenge, but four athletes, who spend most of their time training and preparing for competitions, self-isolation appears to be nothing short of torture.

Tottenham manager Jose Mourinho could face a police warning after he was seen training with three first-team players in a London park amid the coronavirus lockdown. It appears that the acclaimed manager and three athletes not only ignored government rules on self-isolation, but also violated social distancing rules as they were exercising several yards away from members of the public.

UK health guidelines say that people should stand two metres apart from each other, while gatherings of more than two people are not allowed.

The incident allegedly occurred on 7 April, when the United Kingdom recorded its highest number of deaths from the coronavirus – 786, bringing the overall death toll to 6,159.

Tottenham refused to comment on Mourinho’s misdemeanour, but an anonymous club source told The Sun that the 57-year-old manager only intended to do a fitness session with Tanguy Ndombele, who the Spurs signed for a record $72 million last July.

The incident comes a day after two other players from Tottenham’s first team were seen jogging in the park together and ignoring social distancing. The video posted online shows Ryan Sessegnon and Davinson Sanchez not maintaining the two-metre gap, touted as the best way to curb the spread of coronavirus, which has infected more than 55, 000 people in the United Kingdom and 1.4 million worldwide.

It appears that following self-isolation rules is not only hard for athletes, who spend most of their time training and preparing for competition, but even for people who makes these same rules. New Zealand’s health Mmnister resigned on 7 April after it transpired that he took his whole family for a beach trip 20 km away from home.