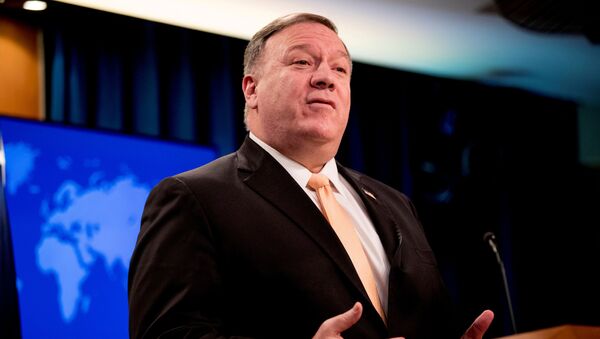 US Secretary of State Mike Pompeo said at a Wednesday White House news conference that US sanctions had not prevented humanitarian assistance from reaching Iran.

"We've offered from the first day we knew that the virus had struck the people of Iran, we offered humanitarian assistance," Pompeo said at the briefing.

"I regret that they chose not to take that. I've heard people talking about sanctions, the world should know there are no sanctions that prevent humanitarian assistance, medical supplies, pharmaceuticals, from going to Iran. We offered American assistance, we tried to help other countries get assistance in there as well. We've had some ability to do that," Pompeo said.

As the COVID-19 pandemic began to spread from China to other parts of the world in February 2020, Iran was one of the earliest nations hit - and hard. Its case numbers and death toll quickly rivaled all nations except China, where the outbreak began, and Italy. As Iranian leaders began to call for a drop in sanctions in order to enable a more efficient fighting of the outbreak, the US response was instead to demand the release of imprisoned Americans. Tehran's calls were soon echoed by other countries, world leaders and even US lawmakers.

World Health Organization (WHO) Director-General Tedros Adhanom urged the US to drop it sanctions: "This is everyone's business; no one should be excluded. Especially leaders have a special role to play to tell people to adhere to basic morality. This virus is a common enemy."

​As the Washington Post explained, while US sanctions do not bar the importing of medical goods, they do greatly frustrate financial transactions made with Iranian entities, making buying the medicine and other medical devices much more difficult.

Iran has roughly 65,000 cases and suffered nearly 4,000 deaths from the coronavirus.

'No Time' To Consider WHO Leadership Change

When asked by a reporter at the news conference about recent talk about reshuffling leadership at the WHO following denunciations of the agency by US President Donald Trump, Pompeo said the more important thing was fighting the COVID-19 pandemic.

"This is no the time to be doing that kind of change," Pompeo said. "There will be a lot of time to look back."

Earlier this week, Trump attacked the WHO as being "China-centric," claiming it had misreported on the early stages of the COVID-19 outbreak and given the US bad advice about preventing it. Trump threatened to withhold US funding for the United Nations-directed agency, which gets more funding from the US than any other country.

Pompeo told reporters the US State Department had been working nonstop since January to bring as many Americans as possible back to the US from locations abroad.

According to the state secretary, the US has repatriated more than 50,000 US citizens from more than 90 countries since January, an operation “without parallel in our lifetime.”