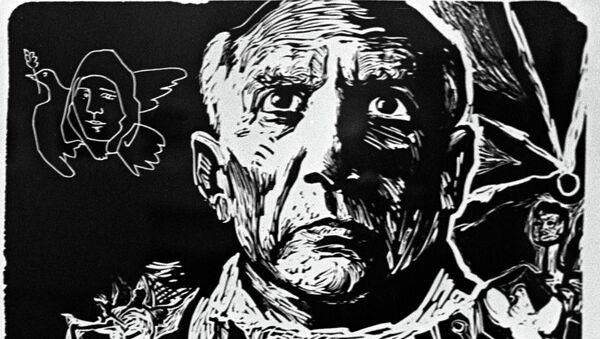 © Sputnik / A. Cheprunov
Subscribe
A 1903 Pablo Picasso pastel drawing, entitled “Head of a Woman,” is returning to the market at a price of at least $10 million.

According to a report by the Wall Street Journal, the drawing created by the famous Spanish artist was sold by German-Jewish banker Paul von Mendelssohn-Bartholdy to art dealer Justin Thannhauser in 1934 out of fear that the Nazis would confiscate his estate. The banker sold at least 15 other significant works that year, including others by Picasso. The National Gallery of Art in Washington, DC, eventually obtained “Head of a Woman” in 2001 through a donation.

​Von Mendelssohn-Bartholdy bought the drawing in 1912, and last September, his descendants asked New York art dealer Larry Gagosian whether his gallery could help sell the art piece if they ever retrieved it from the National Gallery of Art, which they eventually did, being granted restitution of the drawing in February 2020.

According to Mendelssohn-Bartholdy’s several dozen descendents, they wanted to sell the drawing because it is challenging for all of them to share one piece of artwork. They will most likely use the money from the painting to pay “legal fees and fund potential restitutions,” the Wall Street Journal reported.

In a recent statement, the National Gallery said it chose to return the Picasso piece to “avoid the heavy toll of litigation.” However, the decision to do so “does not constitute an acknowledgment of the merit or validity of the asserted claims,” the gallery added, the Wall Street Journal reported.

“Head of a Woman” is about 1 square-foot in area and features a blue-eyed woman with brown curls and a serious expression. The drawing was completed during a melancholic phase of Picasso’s career, called the Blue Period, between 1901 and 1904. Picasso art pieces from this time period have sold for as much as $67.4 million.

000000
Popular comments
we cant let a little worldwide pandemic stop the money laundering now, can we?