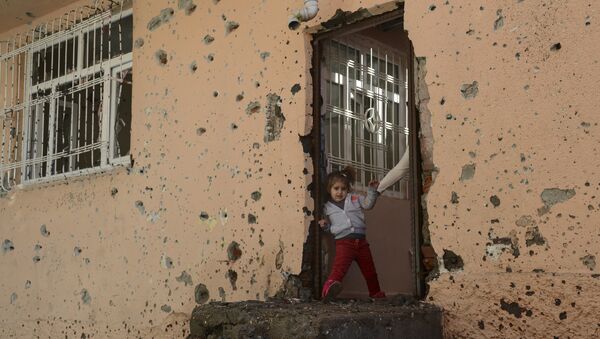 ANKARA (Sputnik) - Five civilians have been killed in an attack carried out by the Kurdistan Workers' Party (PKK), which is designated as a terrorist organisation, in the southeastern Turkish province of Diyarbakir, provincial authorities said on Wednesday.

"Today at 06:30 a.m. [03:30 GMT] in the Kulp district, five residents who were travelling by car to the forest to harvest firewood were killed as a result of a blast of an improvised explosive device planted by members of the PKK terrorist organisation. Our security forces launched an operation to identify and capture the perpetrators of the attack", the authorities said in a statement.

In March, the Anadolu news agency reported that Ankara intends to build a drone base in the eastern province of Erzurum to launch operations against Kurdish militants.

Turkey to Introduce New High-Accuracy Software for Military Anti-PKK Drones
The Turkish government has been fighting the PKK since the early 1980s. The PKK/YPG seek to establish a Kurdish autonomous state, including in parts of Turkey, an aspiration that expectedly has met a strong confrontation in Ankara and prompted anti-PKK raids by the Turkish security forces. The Turkish military also attacks Kurdish forces in northern Iraq and it was the fight against the Kurdish terrorists that Ankara said was the reason for its military operation in northern Syria.

Though the sides signed a ceasefire agreement between in 2013, the armed conflict resumed two years later in the wake of several terror attacks allegedly committed by PKK militants.