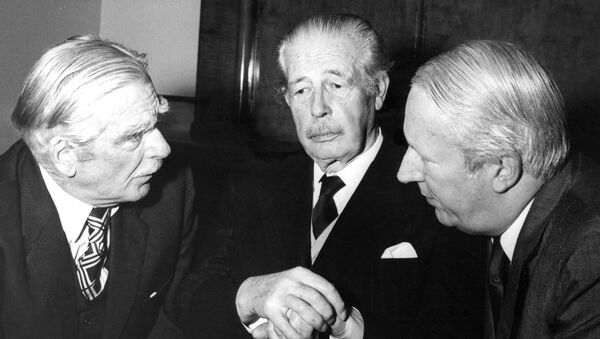 © AP Photo / Robert Dear
Subscribe
The British prime minister remains in intensive care with the coronavirus and has handed over day-to-day control of the government to Foreign Secretary Dominic Raab.

He believed that whatever a politician might plan, whatever bold agendas they might set out in their manifestos, they could be blown off course by political, economic, military or even meteorological events.

Boris Johnson is a classic case - he won a landslide election on 12 December 2019 and used his parliamentary majority of 80 to finally take Britain out of the European Union on 31 January.

​But he had barely started out on his plans for reshaping post-Brexit Britain when the coronavirus arrived in the country and by 23 March he was forced to put the country into lockdown at huge financial cost.

So which other political leaders have had to shelve their big plans to cope with an unforeseen event?

Anthony Eden, a successful Foreign Secretary who had served in Winston Churchill’s War Cabinet, was lined up as his successor when the great British statesman, by then 80, decided to retire in April 1955. 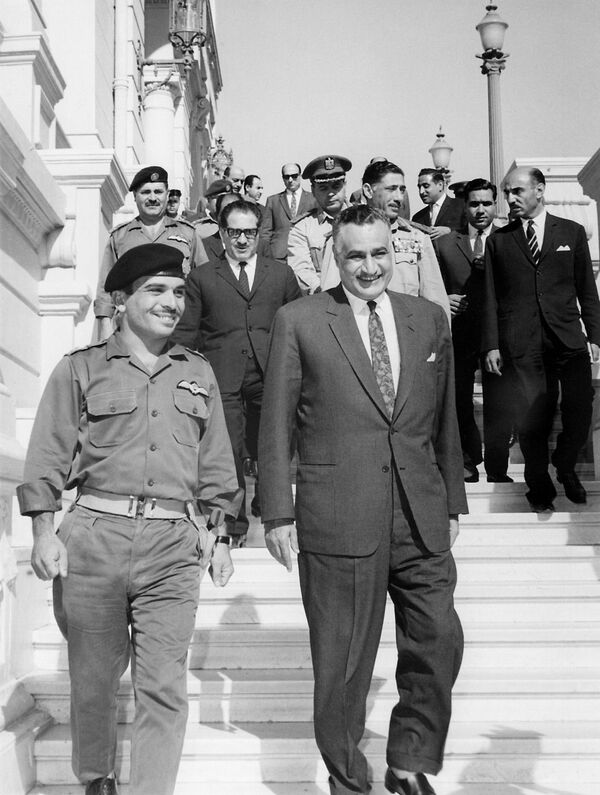 Britain had only ended food rationing nine months earlier and the country was still paying off huge war debts to the United States.

But although India and Pakistan had been granted independence, Britain still had a huge empire and Eden believed he was still leading a major world power.

​Then, out of nowhere, on 26 July 1956 Egypt’s nationalist leader and former army general, President Gamal Abdel Nasser, announced he was nationalising the Suez Canal.

Britain and France immediately saw it as a threat to their national interests and cooked up a secret deal with Israel to march in and reclaim the canal zone.

On 5 November 1956 British and French paratroopers were dropped into the canal zone as Israeli tanks sped west across the Sinai Desert.

But the United States was furious and showed it was the dominant world power - along with the Soviet Union - by pressuring Eden and the French into withdrawing.

Nasser was allowed to keep the Suez Canal and on 9 January 1957 a humiliated and exhausted Eden resigned, handing over to Harold Macmillan.

The US Presidential election in November 2000 was as close as they came, with victory resting on the state of Florida.

The Vice President and Democratic candidate, Al Gore, was still unwilling to concede defeat and only did so after a US Supreme Court ruling in December 2000. 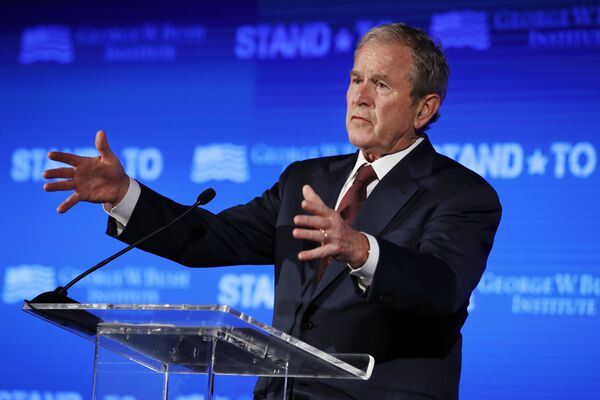 George W. Bush - whose father had left the White House only eight years earlier - was finally inaugurated in January 2001 and was focused on a Republican agenda of making huge tax cuts and limiting abortions.

But all that changed on 9 September 2001 when a group of al-Qaeda terrorists, commanded by Afghanistan-based Osama bin Laden, flew two planes into the World Trade Center in New York and another into the Pentagon in Washington DC. A fourth plane - possibly destined for the White House - crashed in a field after passengers challenged the hijackers.

Almost 3,000 people died on what became known as 9/11 and the US surfed a tide of global goodwill.

Bush, and his Vice President Dick Cheney, saw 9/11 as an opportunity.

​Instead of just marching into Afghanistan and turfing out al-Qaeda and their Taliban allies - which they duly did - they decided to try and take advantage of widespread paranoia in the US and western Europe about the jihadist threat and use it to oust Iraqi leader Saddam Hussein.

Bush’s father had allowed Saddam to stay in power after defeating him in the first Gulf War in 1991 but Dubya - as he was dubbed by the press - asked the intelligence services to come up with evidence of a link between al-Qaeda, Saddam and Weapons of Mass Destruction (WMDs).

Dossiers of bogus intelligence were duly produced and in March 2003 US-led forces invaded Iraq and ousted Saddam, who was later executed.

No WMDs were found and the vacuum left behind by the destruction of the Iraqi government was soon exploited by al-Qaeda and other Islamist forces, creating the monster that would one day become Daesh*.

After the Second World War the French Fourth Republic was set up but the president was not chosen directly in an election but was appointed by whichever party or parties could form a government.

And so it was that on 23 December 1953 René Coty was finally chosen - in the 13th ballot - as the President of France.

Coty, 71, had been president for less than a year when the Algerian nationalist FLN launched the Toussaint Rouge - a series of bomb attacks on French targets in Algeria.

It was the start of the Algerian War of Independence and the violence would spiral, culminating in the Battle of Algiers which lasted for 12 months from September 1956.

As the fighting raged between 400,000 French troops and the FLN, the weakness of the Fourth Republic was exposed and in May 1958 discontented members of the French armed forces launched a coup.

​French paratroopers from Algeria flew to Corsica, took the island over and prepared to launch an assault on Paris.

A desperate Coty begged Charles de Gaulle, a First World War hero and the leader of the Free French forces during the Second World War, as the "most illustrious of Frenchmen" to become his eighth prime minister.

Coty threatened to resign if de Gaulle's appointment was not approved by the National Assembly.

De Gaulle immediately took over, pacified the armed forces, drafted a new constitution and held a referendum which would replace Coty with a Fifth Republic with direct presidential elections, which of course De Gaulle won.

In 1962 De Gaulle granted Algeria independence, much to the chagrin of hardliners in the army and the French settlers (pieds noirs), most of whom moved back to mainland France.

Japan was already battling a storm as a result of the financial crisis which hit in 2009 when in March 2011 it was struck by another natural disaster. 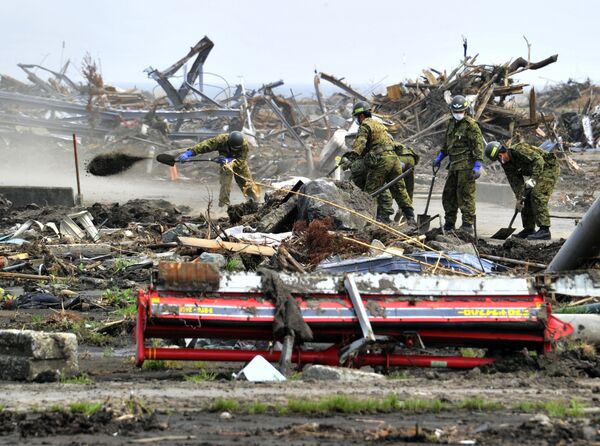 Naoto Kan had been appointed prime minister of Japan in June 2010 after his predecessor resigned after breaking a campaign promise to close a US military base in Okinawa.

The following month Kan’s Democratic Party lost 10 seats in a general election but managed to cobble together a ruling coalition.

Kan was doing a decent job as prime minister and was slowly resurrecting Japan’s export-led economy when the Tōhoku earthquake happened in the middle of the afternoon on 11 March 2011.

The epicentre was 43 miles out to sea and within minutes a tsunami had crashed into the north-east coast of the main island of Honshu, killing 16 people and causing US$360 billion worth of damage. 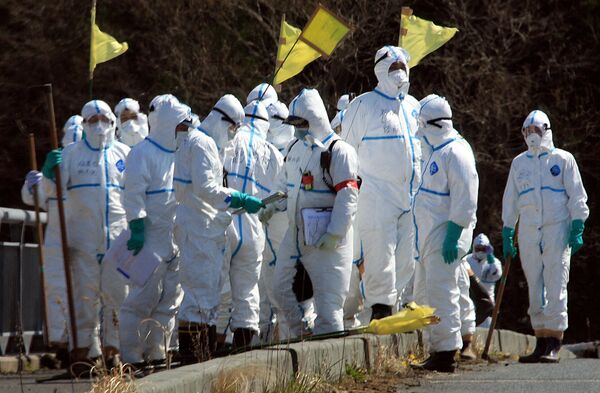 The Fukushima Daiichi nuclear power station was inundated with water, causing a meltdown which threatened the whole of Japan and caused a huge area to be evacuated.

Kan’s approval ratings plummeted amid criticism of his handling of the nuclear accident and the slow pace of the reconstruction efforts and on 26 August 2011 he resigned.

His successor, Yoshihiko Noda, fared little better and was swept from power in the 2012 general election by Shinzo Abe and his Liberal Democratic Party, who remain in power today.

*Daesh (aka Islamic state/ISIS/ISIL) is a terrorist group banned in Russia and a number of other countries.