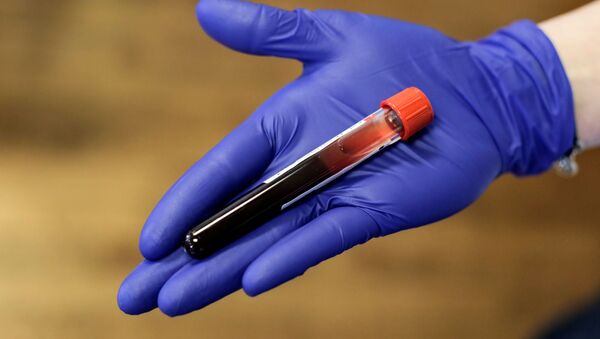 © REUTERS / DAVID RYDER
Subscribe
Advitya Bahl
All materialsWrite to the author
New Delhi (Sputnik): India went into a complete lockdown mode for 21 days on 25 March in a bid to the break the cycle of infection of COVID-19. The lockdown has brought all means of transport to a grinding halt, except for emergency services.

The lockdown has severely hit blood banks in the country, which are a lifeline for critical care, especially when surgery is required. But with no donors, primarily due to the clampdown on transport and secondly due to the prevailing COVID-19 situation, blood banks are facing an acute shortage of stock.

While the entire healthcare system in India is currently focused on dealing with the COVID-19 disaster, regular treatments have been affected in many hospitals.

Priya Arora, doctor at a state-run hospital, with whom Sputnik has spoken, said that with the rapid increase in coronavirus cases, the focus is completely on the disease. But there are other patients battling for life other than due to COVID-19.

"The government is doing everything possible to combat the virus. However, at the same time, other diseases can't be neglected especially which are related to blood", Dr Arora said.

Recently, another doctor, Priyanka Gogoi, in charge of another state-run hospital in Delhi, Guru Teg Bahadur Hospital blood bank, in a circular stated that people who were interested in donating blood at this hour shall be provided with an e-pass.

Amid #Covid_19 outbreak, blood banks are facing shortage. Guru Teg Bahadur Hospital blood bank in a circular stated that people who were interested in donating blood at this hour shall be provided with e-pass. pic.twitter.com/p4vIxEIiEl

​According to medical experts, India is facing a shortfall of three million units of blood annually on average, which badly affects the critical care for thousands of people - many leading to fatalities.

“There is a need of more than 5 lakh units of blood in Delhi every year. Due to coronavirus outbreak and lockdown, blood donation camps cannot be organised. In such a situation, stored blood in blood banks is getting decreased", said Dr Bharat Singh, adviser of the Hospital Blood Bank, a state-level representative body of blood banks in the national capital.

Doctors, however, stated that patients suffering from the coronavirus are not in special need of blood, but those suffering from Thalassemia, Dialysis, and emergency care require blood regularly. Cancer patients also need blood to increase their platelet count.

According to the doctors, if no donors show up in a few days' time, their stocks will deplete, leading to critical situations in hospitals.

“Even if the people come forward to donate blood then also all the hospitals do not have the facility to carry out their virus test before taking donor’s blood which is a major concern. The government should do something on the same otherwise a lot of people would die due to shortage of blood”, Dr Arora stated.

Even a major corporate chain of hospitals has said that their stocks would last for the next 15-20 days only.

So far, 4,421 people across the country have been found COVID-19 positive, including 66 foreign nationals. The death toll from the infection was 114 as of Tuesday, according to the federal Health and Family Welfare Ministry.