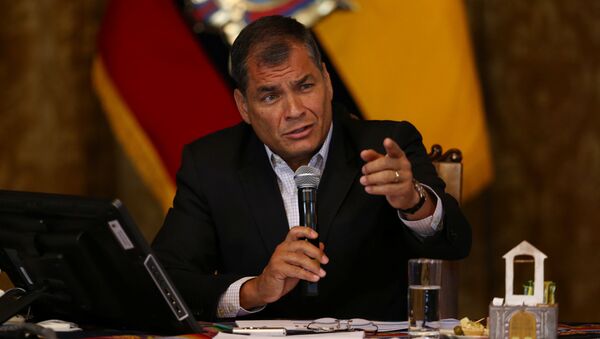 Former Ecuadorian President Rafael Correa and ex-Vice President Jorge Glas have been sentenced to eight years in prison and have lost their political rights for 25 years, The New York Times reported.

They have been both convicted on corruption and bribery charges, according to reports.

Correa has already reacted to the news, saying on his Twitter page that it's a "nightmare" and "everything is bulls**t". He also expressed concern for his colleagues.

"Well, this was what they were looking for: managing justice to achieve what they could never do at the ballot box. I'm fine. I am concerned about my colleagues. Surely we will win internationally, because everything is bulls**t, but it takes years. It depends on your vote that this nightmare ends", he said.

Ecuador’s Attorney General Inigo Salvador said last November that a complex corruption scheme had been created at the level of the president, vice president, and government ministers to manage bribes received from businesses in exchange for state contracts.

Oliver Stone Tells Rafael Correa About Hollywood Censorship, Warmongering in US Politics
The amount of damage to the state inflicted by the corruption from 2012 to 2016 exceeds $7 million, Salvador said, demanding triple compensation.

According to the investigation, the corruption scheme used secret codes, multiple bank accounts, cash transactions, and other methods to conceal the identities of those involved in the affair. In addition, illegal funds intended for electoral activities were not declared to a supervisory watchdog.

Ex-President Correa and his supporters consider the case against him to be politically motivated.​