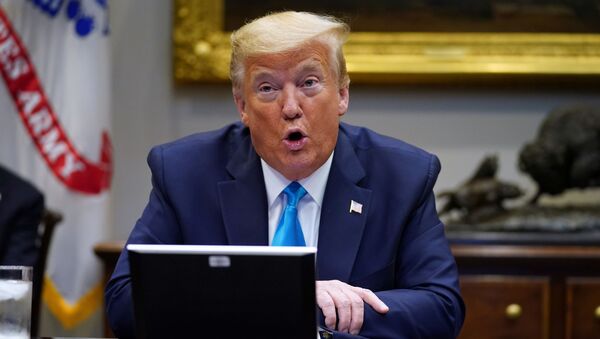 The British PM tested positive for the coronavirus earlier in March and was recently hospitalized and admitted to an intensive care unit in London. UK Foreign Secretary Dominic Raab will deputise for him going forward until Johnson can take back the reigns of power.

The drugs that US President Donald Trump earlier offered to British Prime Minister Boris Johnson have not undergone clinical tests and are not available on the market, The Guardian reported on Tuesday.

The US president said on Monday that he contacted four companies and asked two "to contact London immediately" to offer their products to help treat the British PM. Trump did not elaborate on the names of the four companies he contacted, but his statement came after he met with representatives of cutting-edge biotech firms Amgen, Genentech, Gilead, and Regeneron.

"I’ve talked to four of them today and they speak a language that most people do not understand but I understand something … they’ve really advanced therapeutics and therapeutically and they’ve arrived in London already, their London office has whatever they need and we will see if we can be of help", Trump said in a statement.

According to a spokeswoman from pharmaceutical company Gilead, cited by The Guardian, the company was contacted by Trump but noted that its therapeutic drug product Remdesivir has not been clinically tested.

"He did call our our CEO in the day yesterday but we cannot go beyond that," said the spokeswoman.

Laboratory trials for the use of Remdesivir as a treatment for Sars were successful in 2014 but, as the virus was contained and stopped before it became a global pandemic, clinical trials did not occur, according to The Guardian.

“It is critical we do these clinical trials [for Covid-19] and show its efficacy. It would be irresponsible to make it widely available,” the company said.

Downing Street stated that it is not interested in Trump's offer of "experimental drugs", according to The Guardian.

Earlier, Sputnik reported, citing a source in the National Health Service, that PM Boris Johnson was to be put on a ventilator amid worsening coronavirus symptoms. The assertion was later denied by British officials who claimed that Johnson was hospitalized to get precautionary tests on the advice of his doctor. Later, the PM was admitted to the intensive care unit in St Thomas Hospital in London. Johnson has asked Dominic Raab to perform duties that the PM is unable to fulfill while in hospital.