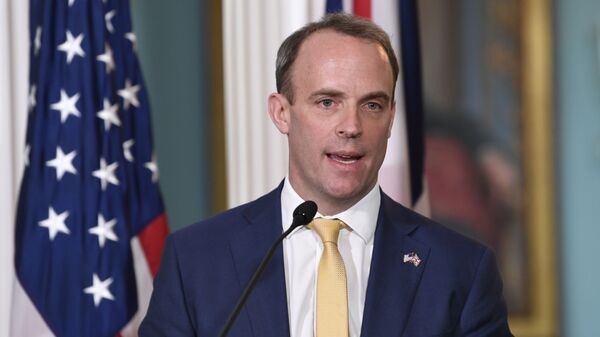 Tim Korso
All materials
Boris Johnson was admitted to hospital after the symptoms caused by the coronavirus infection failed to cease a week after the prime minister tested positive.

UK Foreign Secretary Dominic Raab, who is currently in charge of meetings on the coronavirus outbreak situation in the country, has revealed that he last spoke with Prime Minister Boris Johnson in person on 4 April – before the latter was hospitalised due to COVID-19.

"I spoke to the PM over the weekend. I chaired the morning meeting that he would normally chair. He's been kept abreast of all the relevant development", he said.

When asked by journalists if he is ready to take over the government if needed, Raab responded that Boris Johnson is still in charge and is issuing directions when it is required.

Raab's remarks come as the prime minister's spokesman denied a report that Johnson is undergoing artificial lung ventilation and added that he is "in good spirits". The PM also wrote a Twitter post on 6 April, clarifying that he went to hospital to run routine tests on the advice of his doctor, as he is still experiencing COVID-19 symptoms 10 days after testing positive.

The prime minister's spokesperson also said that Johnson remains in charge of the government and is receiving "his box of work" while in hospital. At the same time, he noted that Foreign Secretary Dominic Raab had taken over Johnson's role in the commission on handling the coronavirus outbreak and would chair it for the time being.

Earlier, Sputnik reported, citing a source in the health authorities, that the prime minister would be undergoing artificial lung ventilation in hospital.

The UK witnessed a surge in the number of coronavirus cases in March, with the total number of infected exceeding 47,000 people by 5 April and fatalities reaching 4,934.