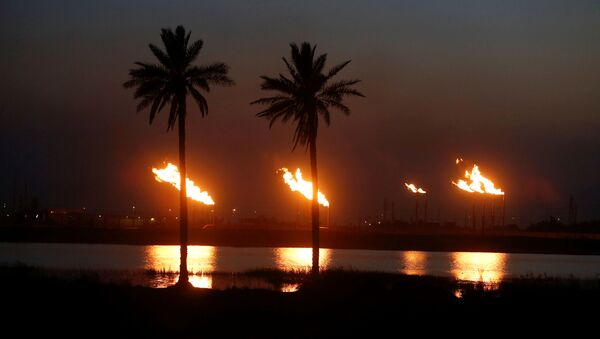 In late March, the US military deployed its Patriot missile defence system to the Ayn al-Asad base in Iraq in a move to "protect against another potential Iranian attack”.

Reuters on Monday reported, citing its sources, that missiles hit near sites of foreign and state-run oil companies in Basra, Iraq. No casualties have been reported so far.

According to police, the missiles were Katyushas launched at around 3 a.m. local time and hit the Burjesia residential and operations headquarters west of Basra.

At the same time, the Iraqi military stated that the rockets hit near US-based Halliburton company site.

Initially, the parties were scheduled to meet on 6 April but the talks were postponed until 9 April.

Russia Didn't Support Termination of OPEC+ Deal, Putin Eager to Have Constructive Talks - Kremlin
Oil prices suffered their worst decline in decades in March after Russia and Saudi Arabia failed to reach a deal on output cuts amid the ongoing COVID-19 crisis.

Russia proposed leaving output cuts at previously agreed-upon levels, while Saudi Arabia and its allies suggested that additional cuts be made.

Russia rejected the proposal, prompting Riyadh to cancel even the originally agreed upon cuts, to announce a 25 percent increase in production, and to offer heavy discounts on crude futures for April.