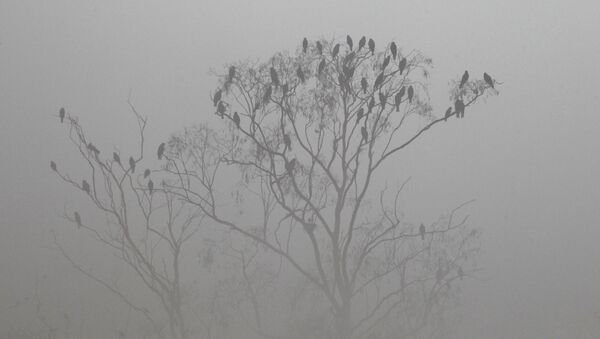 New Delhi (Sputnik): While a single flock of birds taking off into the vast sky is enchanting, a swarm of hundreds of thousands of birds creates a spectacular illusion of a single black mass weaving through the air.

In an incredible moment captured in the Indian state of Gujarat, a giant murmuration of thousands of birds made the shape of a tornado in the sky.

The skies swiftly turned from blue to grey and then to pitch black after hundreds of thousands of birds dived and swooped for several minutes, forming an incredible murmuration. The birds took over the skies of various cities in the state in the mass aerial stunt.

This phenomenon is called as murmuration. Nature’s extravaganza when birds dance in a group. Can be seen in many cities of Gujarat. Normally. pic.twitter.com/5fmRz7FDyE

Sharing video footage of the spectacular phenomenon, Indian Forest Service officer Parveen Kaswan clarified that this murmuration has nothing to do with the lockdown, but is a normal behaviour.

“This is like a defence mechanism, as some claim. Nobody can tell you for sure. I shared because in the next few days you will see such videos with claims that birds have taken over the cities due to lockdown. Remember it’s normal", said Kaswan.

The video clip is going viral on Indian social media since being shared and it has already been viewed over 156,000 times.