In From the Cold: Ed Miliband and Lord Falconer Brought Back by Labour Leader 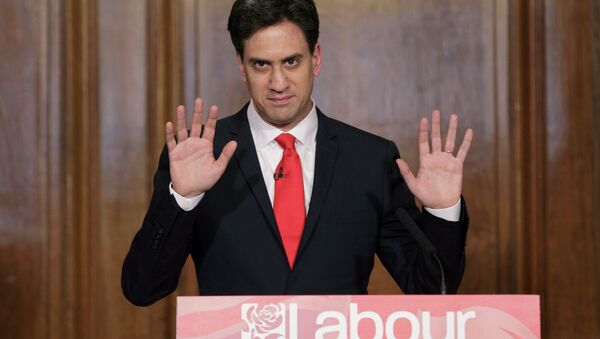 The new Labour Party leader Sir Keir Starmer has appointed Lisa Nandy as Shadow Foreign Secretary and brought back in from the cold two politicians from the Tony Blair era - Ed Miliband and Lord Falconer.

Ed Miliband - who was given his first ministerial job by Blair in 2006 - has replaced Rebecca Long-Bailey as Shadow Business, Energy and Industrial Strategy Secretary.

My statement on being announced as the Shadow Business and Energy Secretary: pic.twitter.com/gxP5Jc1ZEC

​He was Secretary of State for Energy and Climate Change between 2008 and 2010 and was one of the first UK politicians to raise the profile of climate change as a serious issue facing the planet.

Miliband, 50, was in the shadow of his older brother David, 54, during the Blair/Brown government.

The older brother was promoted to Foreign Secretary by Brown in June 2007 and held the job until Labour lost the 2010 election.

Then, when the Tory-Liberal Democrat coalition came to power and Gordon Brown resigned, the Miliband brothers fought it out with Ed Balls and Andy Burnham for the leadership.

David Miliband was the strong favourite and won the first round of voting but his brother Ed beat him by 50.7 percent to 49.3 percent in the second round.

While his brother quit as an MP and moved to New York to become CEO of an international charity, Ed Miliband set about trying to make Labour electable again.

​The Episode With The Bacon Sandwich

As the coalition government enacted its austerity programme, he closed the gap in the opinion polls but in May 2014, during the local election campaign, he took the fateful decision to order a bacon sandwich while out shopping for flowers with his wife in London.

Remember when Ed Miliband ate a bacon sandwich and everyone said he was useless and could never run this country?

​A photographer took an unfortunate picture of an ungainly Miliband - who is of Jewish heritage but an atheist - chewing his bacon sandwich.

The picture was splashed on the front page of a tabloid newspaper and Ed Miliband’s reputation never really recovered.

Ed Miliband? Tell the shadow cabinet to get the bacon butties in..... pic.twitter.com/lr3IzlcIEO

​He lost the 2015 general election after presenting a weak manifesto which had very few policies and was famously presented to the press, carved into a stone monolith.

Ed Miliband resigned straight away and returned to the back benches, while carving out a part-time career as a radio presenter and podcaster.

1.Delighted to be appointed as Shadow Education Secretary by @Keir_Starmer & thanks to the brilliant @AngelaRayner for her work in this role. In this time of crisis I will do my utmost to ensure that our teaching staff, students and their families receive the support they deserve https://t.co/esQ9Z88c1K

​He reportedly refused several overtures from Corbyn to rejoin the Shadow Cabinet but was never overtly disloyal to the Labour leader.

Lord Falconer, now 68, has also been brought back as Shadow Attorney General.

Lord Falconer returns to the Shadow Cabinet sounds like it should be from a fantasy novel but somehow it's British politics today.

​Charles Falconer was made a life peer by his former flatmate Tony Blair in 1997 and held a series of jobs in the Labour government Cabinet as Lord Falconer.

Falconer once said of Blair: "One of the odd things, for a man who is so unaggressive, is how he reached the top of the pack, so apparently effortlessly, in politics. He is incredibly impatient."

As one of Blair’s closest aides, Lord Falconer served as a minister at the Cabinet Office, before moving to the Home Office in 2002.

Falconer, a barrister and Queen’s Counsel, infuriated his fellow lawyers by calling for their legal fees to be reformed.

If Lord Falconer is Shadow Attorney General, where's Shani gone?
They seek her there, they seek her here,
That Corbynista Labour peer,
The front bench of the Labour Party
Waves goodbye to Chakrabarti

​He was Secretary of State for Constitutional Affairs between 2003 and 2007 and was then moved to the Ministry of Justice, but lost his job when Gordon Brown succeeded Blair.

In 2015 - after Ed Miliband lost the general election, he was brought back as Shadow Justice Secretary but Jeremy Corbyn sacked him the following year, replacing him with his acolyte Richard Burgon, who lost the job on Monday, 6 April when he was fired by Starmer.