Heading to Great Depression? What the Best Solution to Skyrocketing Unemployment in US & UK May be 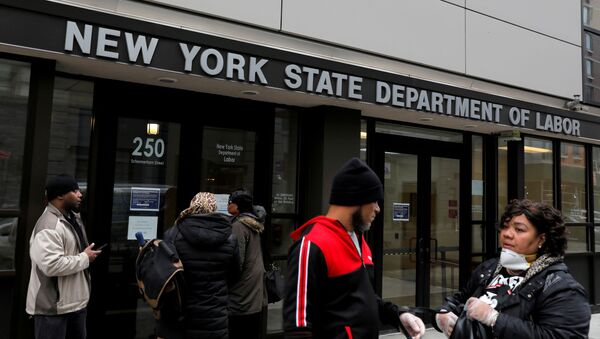 The coronavirus-related recession is threatening to drag the US and UK's economies into a crisis comparable only to the Great Depression of the 1930s leaving millions unemployed. Economists have outlined the causes of the crisis and offered ways to solve the unemployment dilemma.

Unemployment in the UK could reach over 6 million people, or around 21% of the country's workforce, while the number of unemployed in the US could reach 52.8 million, or nearly a third of its manpower, as British-American labour economist and academic David Blanchflower has warned in his recent op-ed for The Guardian. For comparison's sake in the 1930s, the UK and US unemployment rates rose up to 15.4% and 24.9%, respectively. Under these circumstances the 2008 financial crisis appears all but "trivial", according to the media outlet.

For its part, Fitch Ratings Inc., one of the "Big Three credit rating agencies", forecast that global economic activity will decline by 1.9% in 2020 sending America's GDP down by 3.3% and the UK's by 3.9%.

High Unemployment Rates Will Go Down After Reaching Peak

To tackle the emerging problem, authorities in Britain and America have rolled out a whole set of monetary and stimulus measures. In late March, Washington introduced a $2 trillion package, the largest in US history, to provide COVID-19 economic relief. For its part, the UK announced a £330 billion ($398 billion) emergency government programme.

According to Joseph Gagnon, a former visiting associate director of the Division of Monetary Affairs at the US Federal Reserve Board, "high unemployment is a good sign because it means people are staying at home and reducing spread of the virus".

"A very high unemployment rate, possibly above 20 percent, is likely for April and May, but it should fall thereafter", he says, emphasising the importance of the government's "three very large programmes to help" mitigate the negative economic impact of the virus and support those hit by the recession.

"First, $1,200 checks to every adult and $500 for each child; second, expansion of unemployment insurance to cover self-employed and gig workers plus all unemployed get an extra $600/week on top of normal benefit for 4 months; third, small businesses get loans they do not have to pay back if they rehire their workers quickly", he elaborates, admitting that that big question is as to how rapidly the money will be transferred to the unemployed. 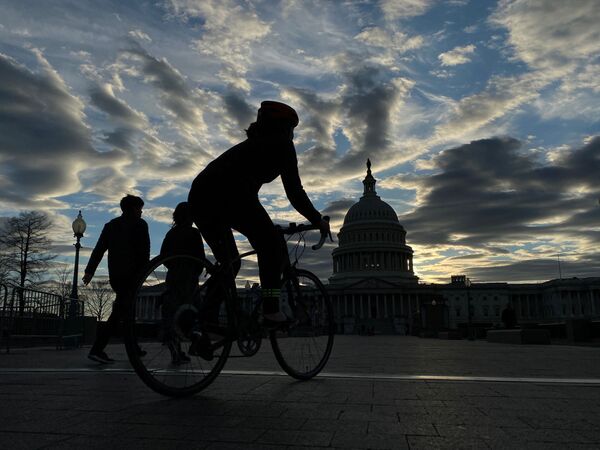 Walkers and cyclists take to the east front of the U.S. Capitol during the outbreak of the coronavirus disease (COVID-19), as personal exercise is exempted from the city-wide stay at home orders, in Washington, U.S. April 3, 2020.
© REUTERS / JONATHAN ERNST

The COVID-19 pandemic is hitting very hard the productive capacity of all economies, causing disruption in the supply chains of big enterprises and knocking many small firms out of the market, notes Antonio Moreno, professor of economics and finance at the University of Navarra, Spain.

Moreno argues that the damage caused by the 2008 crisis was easier to tackle because it hit a limited number of very large financial institutions which were bailed out by governments. In contrast, the current health shock has impacted the real economy in the first place, he highlights, adding that the financial sector may suffer later. What's worse, it has dealt a heavy blow to a myriad of retail and small enterprises that are going to have a hard time now, according to the professor.

The academic outlines two key aspects in paving the way for recovery: first and foremost, it's important to stop the virus itself both in Britain and the US, in order to "resume economic activity with good health conditions".

Second, the US and the UK should continue to take monetary and fiscal measures aimed at "providing liquidity to the banking sector, so that banks can keep lending to firms that are in a financial struggle these days". The idea to send stimulus checks directly to the population would help "keep the demand afloat", according to the academic.

However, Moreno highlights that the aforementioned economic measures are temporary and can't last forever, otherwise it would have a negative impact on the financial sector: "The sooner the situation improves, the more transitory this monetary policy help is going to be", the professor points out. "This would be the best scenario for the financial system and the economies overall".

Global Cooperation is the Best Way to Solve the Problem

The striking employment data in the UK and the US amid the coronavirus pandemic is by no means surprising, agrees Bo Chen, the Chutian Professor in Economics at Huazhong University of Science and Technology and Research Associate at the Federal Reserve Bank of Dallas, outlining two main reasons behind the trend.

On the one hand, COVID-19 is a "drastic shock to both supply and demand", he says explaining that "broken supply chains and weak demand make production harder to continue". While, on the other hand, "the uncertainty of the duration of the pandemic breaks the confidence of the employers such that they choose to directly fire workers rather than keep them partly employed".

In contrast to Moreno, Chen expresses skepticism over the "unprecedentedly tremendous stimulus plan" adopted by Washington and London to save the economy, by saying that it is "widely deemed insufficient, even in the short run". What can really heal the countries' economy and fix the unemployment problem is "global cooperation", the academic says dubbing it "the best and fundamental solution".

"We should reduce tariffs and other trade barriers to help save the already fragile global supply chain", Chen underscores. "We also should share relevant data and pay attention to the experience of other countries so that we can know how to be more effective to protect ourselves and researchers can accelerate the process of developing medicines and vaccines".