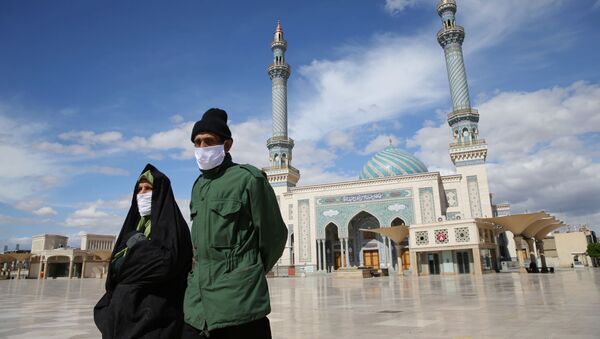 © REUTERS / WANA NEWS AGENCY
Subscribe
International
India
Africa
The call comes as the world struggles with a rapidly spreading virus pandemic which has so far infected over 1.3 million people around the globe, killing over 73,000. Iran is one of the countries hit hardest by COVID-19 and has been struggling to slow the outbreak, a task made more difficult as the nation is under severe US trade sanctions.

A group of 24 former senior world officials called on the administration of US President Donald Trump on Monday to ease unilateral sanctions imposed on the Islamic republic as a means of saving “potentially hundreds of thousands of lives” amid the ongoing coronavirus pandemic.

The group of officials includes four former NATO secretary generals, UN and EU senior officials, foreign and defence ministers of a number of European countries, the Middle East and the US.

Among those who joined the ranks of the signatories were former EU foreign affairs chief Federica Mogherini, former director general of the World Health Organization, Gro Harlem Brundtland, former US Secretary of State Madeleine Albright, and former US defence secretaries William Cohen and Chuck Hagel.

The officials issued their call under the umbrella of the European Leadership Network (ELN) and The Iran Project (TIP).

“Like many Americans and Europeans, Iranians are also facing one of their country’s darkest times in living memory. As the world grapples with COVID-19 – the disease caused by the novel coronavirus – we must remember that an outbreak anywhere impacts people everywhere. In turn, reaching across borders to save lives is imperative for our own security and must override political differences among governments,” the officials said in a joint letter to the Trump administration on Monday.

The officials urged Trump to partially lift the sanctions to allow the Islamic republic to purchase medical and humanitarian goods that may help the Iranian healthcare system to slow the spread of the virus. They point out that the move will also slow the spread of the deadly disease across borders, indirectly saving lives in neighbouring nations, as well as the rest of the world.

“Though never intended to kill, US “maximum pressure” through sanctions on Iran are compromising the performance of the Iranian healthcare system as Iran’s outbreak moves into its second month,” the signatories wrote. “Targeted sanctions relief would be both morally right and serve the health and security interests of the United States, Europe, and the rest of the world”.

Since the beginning of the coronavirus outbreak in Iran, Iranian officials, along with a host of foreign officials, including many Americans, have repeatedly called on Trump to lift the unilateral economic sanctions on Tehran. Iran has also urged other nations to “stop obeying immoral and illegal US sanctions”.

On 23 March, several members of the US Congress signed a letter sent to US Secretary of State Mike Pompeo and treasury secretary Steve Mnuchin asking for a suspension on sanctions against Iran, as the Islamic republic, similar to the US, is facing a heavy coronavirus outbreak.

Russia and China, along with other nations, have consistently called on Trump to lift the sanctions, and have sent humanitarian aid and medical professionals to Iran in a bid to help the coronavirus-hit country.

In May 2018, the Trump administration reimposed crippling economic sanctions against Iran, after withdrawing from the 2015 Iran nuclear deal, officially known as the Joint Comprehensive Plan of Action (JCPOA).

As of Monday, Iran has seen 136 new coronavirus-related deaths in the past 24 hours, bringing Iran's overall death toll to 3,739, along with 60,500 confirmed infection cases, according to Iranian Health Ministry.