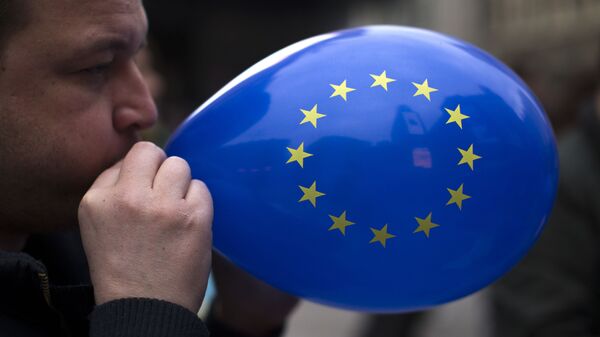 Tim Korso
All materialsWrite to the author
The Marshall Plan was a $12 billion (over $120 billion in today's value) aid package sent from the US to certain European countries in a bid to support rebuilding the continent after the end of the Second World War. Despite generally believed to have been successful, its actual impact on Europe's restoration is still debated among historians.

President of the European Commission Ursula von der Leyen has called on members of the bloc to invest heavily in the EU budget, claiming that the union requires a Marshall Plan to save its member states amid the coronavirus pandemic, in an apparent reference to financial aid that was extended to several European countries by the US back in 1948.

"The many billions that have to be invested today to avert a greater catastrophe will bind the generations together", she wrote in an editorial for the German newspaper Welt am Sonntag.

Spanish Prime Minister Pedro Sanchez, whose country has been suffering greatly due to the COVID-19 infection, also called for a new Marshall Plan for Europe in a separate op-ed in another German newspaper, Frankfurter Allgemeine Zeitung. Sanchez went even further by suggesting that the EU requires a special budget akin to one adopted during times of war.

"Europe has to establish a wartime economy and put in place measures for the defense, the reconstruction and the economic recovery of Europe", the prime minister suggested.

Sanchez believes that if decisive action is taken to fight the coronavirus-induced crisis, the EU will emerge from it in "much stronger" shape.

The calls of the two politicians have already sparked reactions, with the minister for European affairs for Hessen in Germany, Lucia Puttrich, slamming the initiative. She suggested that those who demand "more billions for the European budget" effectively want to reduce the amount of so-called net contributing member states - the EU countries that pay more to bloc's budget than others in an effort to boost weaker European economies.

Unlike the original Marshall Plan, where the US provided money to rebuild European economies after the end of the Second World War mostly in the form of grants, the money for von der Leyen's plan is supposed to come from EU member states themselves. Additionally, while the original Marshall Plan is believed to have sped up the post-war recovery of the recipient states, historians still debate to which extent the plan itself should be credited with rate of the recovery.