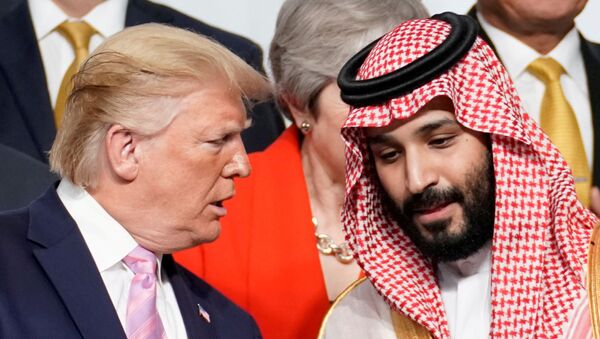 Saudi Arabia has called for an emergency meeting of OPEC+, as oil prices hit an 18-year low at the end of March, amid calls from US President Donald Trump to stabilise the global oil market. International energy experts say that Riyadh's power play hasn't panned out and it is time for a joint US-Saudi-Russian deal for the flailing market.

As benchmark WTI prices hit around $20 per barrel, US shale producers have urged the Trump administration to introduce punitive measures against those responsible for the dumping. On Thursday, following a phone call between President Donald Trump and Saudi Crown Prince Mohammed Bin Salman, Riyadh called upon the OPEC+ group to hold an oil meeting. The conference, initially scheduled for 6 April, was reportedly postponed till 8-9 April. Meanwhile, international experts say that it is time for Saudi Arabia to get on board and join oil producers at the negotiating table.

Saudi Arabia Has Long Fumed Over US Fracking

This is not the first time that the kingdom has attempted to crack down on the American shale industry, says professor of energy economics Dr Mamdouh G Salameh:

"When Saudi Arabia flooded the global oil market in the aftermath of the 2014 oil price crash, its former oil minister Ali Al-Naimi said then that his country’s declared objectives were to defend its market share and also to kill if not slow down US shale oil production", he points out. "This time, when Saudi Arabia declared that it will again flood the global oil market, its objectives were to punish Russia and again to undermine shale oil production."

According to Salameh, Riyadh's moves were understandable: since its inception in 2008, the US shale oil industry "has been producing recklessly even at a loss", thus "depriving most of the oil-producing nations of the world of their livelihood".

"It is only fair that the shale industry shares the pain with other oil-producing nations who are suffering badly from the state of events", he opines, adding that "the US shale oil industry was on the verge of bankruptcy long before the onset of the coronavirus outbreak". 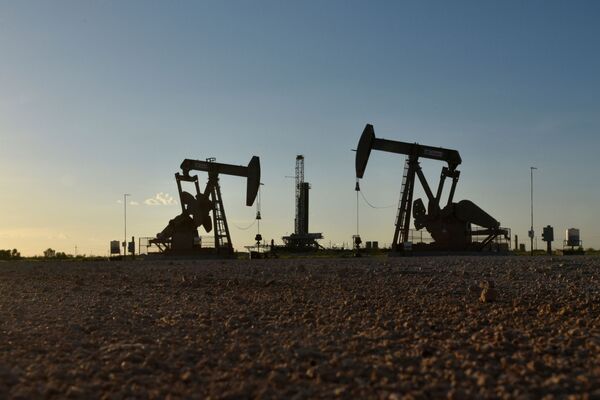 Saudis Have Little if Any Chance of Regaining US Market Share

However, it is unlikely that Washington would allow Saudi Arabia to squeeze the US shale out of the energy market and or to accumulate shares in the American oil industry this time, says Daniel Lacalle, a PhD in Economy and fund manager.

"In any event, Saudi Arabia does not have funds for relevant positioning in the market and in [US] shale companies, and this would not be a solution", he underscores.

According to the fund manager, Riyadh's behavior is "fundamentally wrong", as the kingdom is set to lose much more than it can gain from the oil price turmoil. "The solution is collaboration with manufacturers who have a more logical view of the market", he insists.

James L. Williams, president of WTRG Economics, an Arkansas-based business management consultancy, agrees: "The Saudis can regain market share but only at great cost", he says. "They would have to produce enough oil to keep prices in the low to mid $20s and sustain that for two years."

But even if the Saudis did this, "it is not without risk", he points out: "The last time prices collapsed, US production declined because of lower investment in drilling", the scholar explains. "However, the US improved its technology and the breakeven price for oil in the shale plays declined."

Davide Tabarelli, president of energy think-tank Nomisma Energia, does not believe in the success of Saudi Arabia's market maneouvres either: "To compete with Texas oil companies, it would take months of offering much lower prices", he suggests. "Only when US domestic production falls below 10 million barrels per day, from today's 13 million, the Saudis may hope to increase supply [to the US]."

Likewise, the think tank president does not envision an opportunity for the kingdom to expand its portfolio of American oil assets: "Given that prices are around $30 [per barrel], I think this is unlikely, because the Americans are reluctant to accept Saudi [energy] investments, and because the Saudis themselves will now have problems with domestic financial deficits", Tabarelli highlights.

Dr Mamdouh G Salameh echoes the observers: "In a nutshell, there is not a hope in hell that Saudi Arabia could regain its market share now or ever", he says.

"Moreover, there is anti-Saudi publicity in the United States now, with rising influential voices among US Senators calling for imposing a tax or a tariff on Saudi oil exports to the US, with some Senators even urging the Trump administration to withdraw the US military from the country because of the extensive damage to the US shale oil industry by a Saudi oil price war coming on top of the coronavirus outbreak", the professor elaborates, referring to a joint lobbying campaign kicked off by American shale companies against Riyadh this week. 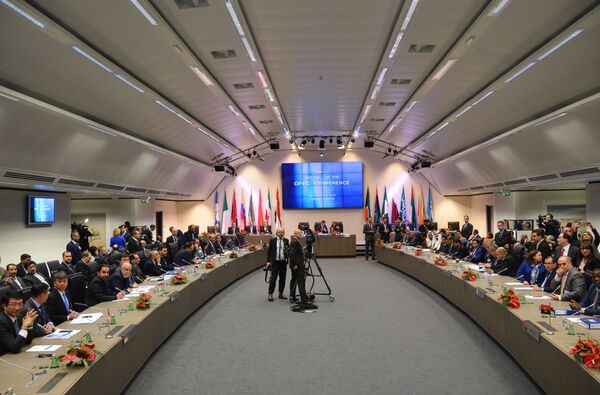 A meeting of the Organization of the Petroleum Exporting Countries (OPEC) in Vienna. File photo
© Sputnik / Alexey Vitvitsky
/
Go to the photo bank

A Hard Road to AN Oil Deal

Francis Perrin, a senior fellow at the Policy Centre for the New South and the French Institute for International and Strategic Affairs, agrees that Riyadh's oil pricing policy has caused a lot of pain to American frackers, forcing the Trump administration to seek a solution to the crisis.

"These talks are very important, as the US, Russia and Saudi Arabia are the three largest oil producers in this order", Perrin says. "They represent together about one-third of the world's crude supply and about 40% of world oil supply. An agreement within OPEC+, or OPEC+ and the US, would be a very significant step from oil producers. They would send a positive message to the markets; they would not add a supply shock to the demand shock; and they would limit the damage. It would be a real success in a very difficult and unprecedented context. And the health crisis will not last forever."

However, the researcher expressed doubts that the reported measure of cutting the world oil out by 10 million barrels per day – or 10% of the present world crude production – would help rebalance the energy market in the coming weeks amid the demand shock caused by the coronavirus pandemic.

James L. Williams holds a different stance. Having agreed that current world consumption "is at least 25 million b/d and more likely 30 million b/d lower than it was before the virus", he suggests that "a 10 million b/d cut would be enough to balance the market in the 3rd or 4th quarter, but crude oil stocks (inventory) will be exceptionally high and take some time to return to normal".

According to Dr Thomas O’Donnell, analyst and consultant on the global energy system, "ideally, there would be some temporary agreement for a coordinated reduction in production between the US, Russia and Saudi Arabia".

"The head of the Texas Railroad Commission, which is legally able to implement 'proration' - production regulation - in Texas, which produces 40% of US oil, is in favour of a deal with Riyadh and Moscow to jointly cut production, and he reports he has had positive discussions with both countries", O’Donnell highlights, adding that Washington's participation in a coordinated cut with OPEC+ "must be a political decision", which would require Trump making the move a matter of national security.

Having said that the trilateral compromise between Washington, Riyadh and Moscow is likely to come at a price for all the players, the researcher warned that "if there is no deal for a joint US-Saudi-Russian production cut, oil-market and also geopolitical tensions will become increasingly heated".

Davide Tabarelli shares a similar stance: "If a compromise is not reached, then the market will take care of it, sending prices lower to the level of 10 dollars per barrel".

"It is of utmost importance to reach a global agreement in which all private companies of the US and the Gulf of Mexico, American frackers and global producers will participate", echoes Daniel Lacalle, adding that "without Russia it will have no effect".