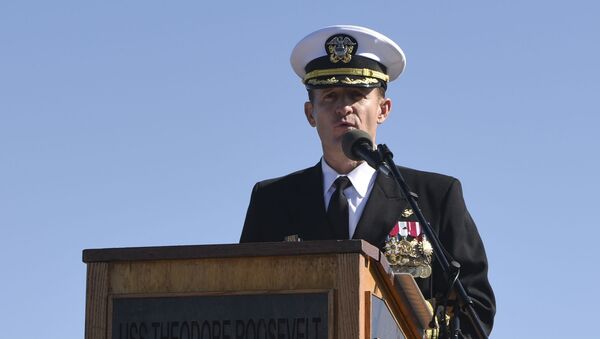 © AFP 2023 / SEAN LYNCH
Subscribe
International
India
Africa
WASHINGTON (Sputnik) - Captain Brett Crozier, who was removed from command of US aircraft carrier Theodore Roosevelt over a letter on the subject of the coronavirus, has tested positive for COVID-19, media reports.

Two Naval Academy classmates of Crozier’s, who are close to him and his family, told The New York Times newspaper on Sunday that Crozier had received a positive COVID-19 test. According to the classmates, Crozier started showing symptoms before he was removed from command of the warship on Thursday.

On Saturday, US President Donald Trump said he supported the decision to remove US aircraft carrier Theodore Roosevelt Captain Brett Crozier over the captain’s inappropriate email regarding the COVID-19 outbreak.

US Congressmen Ted Lieu and Ruben Gallego on Friday wrote a letter to Defence Department Inspector General Glenn Fine urging him to open an investigation into the removal of Capt. Brett Crozier.

In total, 155 sailors on USS Theodore Roosevelt have tested positive for the novel coronavirus, according to the US Navy.