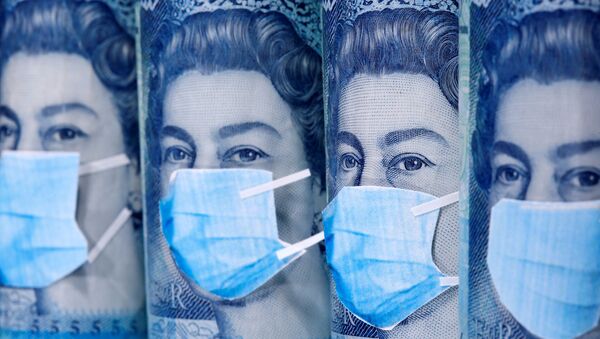 © REUTERS / DADO RUVIC
Subscribe
Lilia Dergacheva
All materialsWrite to the author
At this difficult time, the British monarch will purportedly be handed a nation-unifying role, and urge citizens to scale up their individual efforts to curb the pandemic, as the latter has deeply affected not only the general public but NHS personnel.

The Queen is set to address the nation on Sunday on an occasion other than Christmas for the fourth time in her almost 67-year reign, praising Brits for their “self-discipline” and “good-humoured resolve” during the coronavirus pandemic, The Guardian has disclosed.

In what is described as a “deeply personal message", the 93-year-old monarch, who is currently thoroughly protected from the raging coronavirus on the grounds of Windsor Castle, will reflect on her own experience in difficult times and the challenges Britons now have to face:

“I am speaking to you at what I know is an increasingly challenging time. A time of disruption in the life of our country: a disruption that has brought grief to some, financial difficulties to many, and enormous changes to the daily lives of us all".

She will also reportedly express hope that “in the years to come everyone will be able to take pride in how they responded to this challenge".

Separately, Elizabeth is set to thank those NHS workers that are labouring on the frontline, including nurses and other care staffers.

“The Queen is the best judge of when to talk to the country and we absolutely agree that now is the right time", a senior No. 10 official said.

The disclosures about shortages of medics will intensify pressure on ministers to scale up testing of NHS staff as the health service faces the biggest staffing crisis in its 72-year history.

Meanwhile, a survey by The Sunday Times and the Royal College of Physicians (RCP) has revealed a severe staffing crisis at the NHS. Per the survey, almost one in five doctors are absent from work, amid concerns there is an insufficient amount of tests or personal protective equipment (PPE) for frontline NHS staff.

In particular, the survey found that despite weeks of warnings, nearly one in four doctors (22.34%) had struggled to get appropriate protective equipment kits, despite ministers assuring a million have been distributed.

The survey of over 2,500 doctors found that 18% are off work, which exceeds by three-fold the 5.7% absence rate for doctors cited earlier by Health Secretary Matt Hancock. Four out of five of those off work blamed the coronavirus.

Central London and the northeast are the areas hit the worst by the staffing crisis, where 30% of doctors are off work, according to the survey. One in three — overall 34% — have been absent at some point during the pandemic, due to symptoms of the virus or stints of self-isolation. Overall 27 nurses from the A&E department at Southend Hospital in Essex have reportedly become ill.

Cabinet Minister Michael Gove revealed yesterday that just under 11,000 people were tested on Friday - much lower than the 100,000 daily tests the government has pledged by the end of the month, with Niall Dickson, CEO of the NHS Confederation, which represents organisations across the healthcare sector, warning, as cited by The Times, that NHS staff “need tests and they need them now”.

Likewise, Jenny Vaughan, spokeswoman for the Doctors’ Association UK, which represents frontline medics, said she was “worried” that a lack of PPE “may be contributing to the number of frontline doctors becoming unwell”.

Across the UK, the death toll from COVID-19 hit 4,313 yesterday, a record increase of 708 in just 24 hours. The fatalities included a five-year-old who is understood to have had underlying health conditions, The Times noted.

000000
Popular comments
Who wants to receive advice from geriatric, overpriveledged, self-deluded "rulers of the universe"? Any takers?