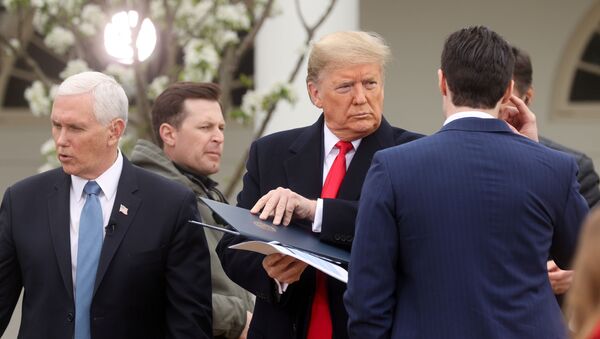 In an overview of the Treaty, the US Arms Control Association states the OST’s “goals to promote openness in military activities” make it “one of the biggest arms control efforts of increasing trust throughout the globe”.

The Trump administration is pushing ahead with previously mooted plans to withdraw from the Open Skies Treaty (OST), a 28-year-old agreement which aimed to reduce reduce the risk of war inadvertently breaking out between the west and Russia by allowing reconnaissance flights over each other’s territory.

Two sources familiar with administration planning have told The Guardian that Defense Secretary Mark Esper and Secretary of State Mike Pompeo are keen to proceed, and expected to issue a statement of intent in the near future, a formal notification of withdrawal to be issued a few months later, possibly by September. The US would then cease to be a party to the treaty six months afterwards.

While reconnaissance flights under the treaty have been suspended until 26th April due to Coronavirus, the US has complained in recent years about alleged Russian infringements of the treaty, which was signed in 1992 and been in force since 2002. In response to incidents such as a prolonged and erratically moving Polish overflight in 2014 which closed down all air traffic over the enclave of Kaliningrad, Moscow has imposed some restrictions on the movement of reconnaissance planes over its internationally recognised airspace.

Another valuable treaty in trouble: The Open Skies Treaty. Here is a great explainer and visual guide via @alxgraef with the project Arms Control and Emerging Technologies at ISFH: https://t.co/ozGzhGmPTN pic.twitter.com/B08ccY8wX3

​Supporters of the Open Skies Treaty say the US and its allies are much greater and more frequent beneficiaries of the agreement, with three times more overflights of Russian territory carried out than Russia flights over US and allied territory - and moreover, that withdrawal would lead to unnecessarily increased tensions with Russia.

This is the U.S. House of Representatives Committee on Foreign Affairs hearing on The Importance of the Open Skies Treaty (held 2019-11-19) that the White House and the NSC REALLY don't want you to watch, because 3 experts tell the truth. #OpenSkiesTreatyhttps://t.co/pnJ8hQcOOs

​For instance, in February Democratic senators Bob Menendez and Jack Reed wrote to the White House saying the OST was “an important multilateral agreement that operates as a critical transparency tool for the US and our allied treaty partners”.

“It provides partners real-time, comprehensive images of Russian military facilities. If this administration moves forward with a precipitous unilateral withdrawal from the treaty the US will be less safe and secure,” the pair argued.

In 2019, the US asked its allies throughout Europe for feedback on the OST, and their thoughts on US withdrawal - it’s alleged responses emphatically urged Washington to remain part of it, although the White House has refused to publicly disclose the feedback in full.

OST is just the latest arms control agreement to be targeted by Donald Trump, who has previously torn up the 2015 Iran nuclear deal and Intermediate-range Nuclear Forces (INF) treaty with Russia.