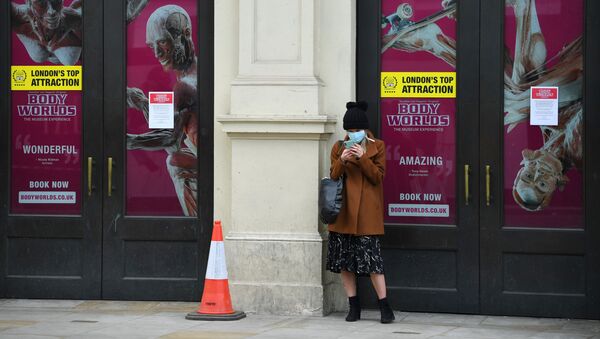 © REUTERS / DYLAN MARTINEZ
Subscribe
​In Newham, police were called to an 18th birthday party at a residential home, clearing the property of over two dozen guests. "This family thought law relating to social distancing shouldn't apply to 18th birthday parties,” the force noted on social media, in a post replete with an eerie photo of the house deserted.

Londoners have been castigated by authorities for ignoring government warnings to stay home, after thousands flocked to parks to soak up the sunshine.

Such was the deluge of spring revellers to Brockwell Park in Lambeth, South East London, the site has now been closed to any and all visitors - police estimate in excess of 3,000 flocked there on 4th April, many of whom went on to ignore social distancing advice while there.

After a day of stop and search and foot chases, Newham’s NTT have been called to clear a house party in Central Park Road. This family thought law relating to social distancing shouldn’t apply to 18th birthday parties. 25 guests moved on. pic.twitter.com/Bo5k7eumhE

​Lambeth Council said the behaviour was "unacceptable" and the "actions of a minority" had compelled them to close the park.

Police forces across London have issued similar condemnations - in Camden, officials noted scores had been dispersed from Primrose Hill, many of whom had “picnics or blankets” and were anarchically engaged in “sunbathing or catching up with friends”. In Bromley, over a hundred people "socialising in groups" were dispersed.

#Disappointed is the only word to describe what we found in #PrimroseHill park today.

We moved on 100+ people who we found with full picnics or blankets sunbathing or catching up with their friends!

Check out a photo we took when we then returned a short while later... pic.twitter.com/4LUEubrDKr

Queen Elizabeth II is scheduled to make a rare address to the British public on the evening of 5th April - it’s only the fifth time she’s done so since taking the throne in February 1952, aside from her annual Christmas Day speech.

Despite clear advice, over 3000 people spent today in Brockwell Park, many of them sunbathing or in large groups. This is unacceptable. Unfortunately, the actions of a minority now means that, following police advice, Brockwell Park will be closed tomorrow. #StayHome

​Her first was during the Gulf War, the second and third were held after the deaths of Princess Diana and the Queen Mother, the fourth was during her Diamond Jubilee.

The monarch is expected to speak of the "increasingly challenging time" that has caused "grief to some, financial difficulties to many, and enormous changes to the daily lives of us all”.

The frightening prospect is that one day fairly soon, the officer here making an wholly subjective medical judgment - refusing to believe a man sitting alone has sciatica and is in pain - is likely to decide whether to detain people who "may be infected" by the coronavirus https://t.co/kcWjz9vUnx

​The UK, which has 41,903 cases of the disease with 4,313 deaths, is about to enter its third week of lockdown. Government guidance allows for one period of exercise outside per day, while advising against all non-essential travel. Prime Minister Boris Johnson, who himself has been diagnosed with COVID-19, released a special message urgings Britons to avoid the "temptation" of the sun over the weekend.