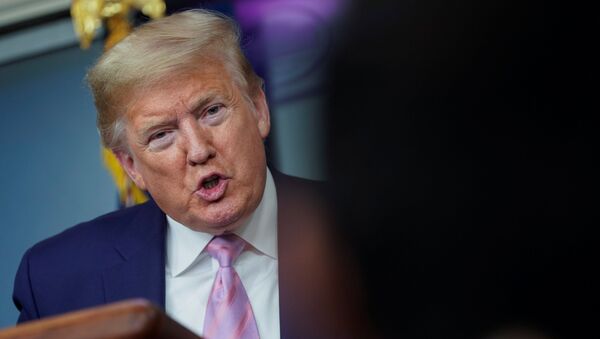 Oil prices have collapsed recently both due to the lowered demand amid the rapid spread of COVID-19 and OPEC+'s failure to reach an agreement on cutting oil output in April.

President Donald Trump said on Saturday that he "does not care about OPEC" and that he will put tariffs on oil imports to the United States if he has to in order to protect the oil industry at home.

"I don't care about OPEC [the Organisation of the Petroleum Exporting Countries]", Trump told reporters at the White House press briefing. "If I have to level tariffs on all imported oil coming into this country, I will. I will do whatever it takes to protect US oil jobs."

Trump also called OPEC "illegal", adding that it is destroying itself.

Trump pointed out that OPEC works to the advantage of Russia and Saudi Arabia and that, according to the latter, a deal could be made soon at a 10-million-barrel reduction "or much more than that."

Trump also said he was confident in the US energy business.

OPEC+ countries are set to meet in the coming week to discuss the potential of reviving an oil output cut deal that expired on 31 March after its members were unable to agree on an extension of a deal to limit oil production.

Jason Kenney, the premier of the oil-producing Canadian province of Alberta, suggested that the organisation had to find a solution to the ongoing issue. If the dispute is not resolved, the US and Canada may potentially impose tariffs on oil imports from Russia and Saudi Arabia, Kenney said.

"Prospective import tariffs on oil coming into North America" were currently being discussed, Kenney said, as quoted by the Financial Times newspaper. "Opec+ started this fire and they have to put it out. We're not going to surrender our industry and we're prepared to go the distance here", the Alberta premier stated, as quoted by the newspaper.