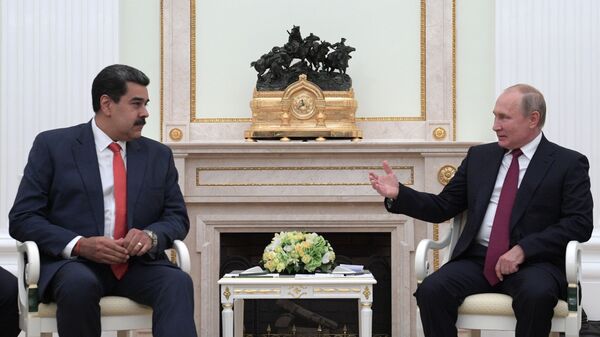 "As for oil production in Venezuela, we continue our cooperation. However, the problem here is not the volumes of output, but the shameful obstacles posed to the Venezuelan oil export by the United States. And this all [happens] without the slightest consideration of the COVID-19 pandemic! Even in the animal world, an unwritten truce around a watering hole comes in effect during a drought," the ambassador said.

"We are in close contact with the leadership of Venezuela on the entire list of issues pertaining to cooperation between our countries and collaboration at various international platforms, including agreements under OPEC+," Melik-Bagdasarov said.

On Thursday, US Special Representative for Venezuela Elliott Abrams said that Washington was in touch with Moscow on Venezuela, including the possibility of establishing a transitional government there, as proposed by the US earlier in March. He also said that the US had no direct dialogue with the incumbent Venezuelan government of President Nicolas Maduro.

"Working contacts with the US Department of State is a regular diplomatic practice. Given the US' specific attention to Venezuela, the interest of US diplomats in discussing issues that are of Washington's concern is understandable," Melik-Bagdasarov said.

On 31 March, the US voiced the proposal to establish an interim government in Venezuela as part of a broader plan to resolve the Venezuelan crisis through what US Secretary of State Mike Pompeo called a peaceful democratic transition. In particular, the interim government would consist of National Assembly members agreed by both the incumbent Venezuelan government and the opposition. Washington said it would lift sanctions from the Latin American country if the plan was observed, including its part on holding presidential and general elections in 6-12 months.

"I do not see the point of commenting on the recently announced 'democratization plan' without a reference to the realities of today. The world today lives through the COVID-19 pandemic. Venezuela's future can only be decided by Venezuela itself. If the US truly wants to participate in this, guided by noble goals, then who prevents it from discussing all their concerns with the legitimate government of Venezuela? President Nicolas Maduro has repeatedly declared readiness for dialogue," the Russian ambassador said.

The political situation in Venezuela derailed last January after opposition leader Juan Guaido proclaimed himself interim president. Several countries, including the US, endorsed him as Venezuela's leader and urged the incumbent president, Nicolas Maduro, to step down. The US then imposed several rounds of sanctions against Venezuelan officials and entities, blocking $7 billion in assets belonging to Venezuela's national oil and gas company Petroleos de Venezuela (PDVSA) and its subsidiaries. Maduro, whose presidency was supported by Russia and China, among other states, has denounced the sanctions as an illegal attempt to seize the country’s sovereign assets.