Not Even Online Sex in Self-Isolation! UK Prostitutes Suffer From Hardship During Pandemic 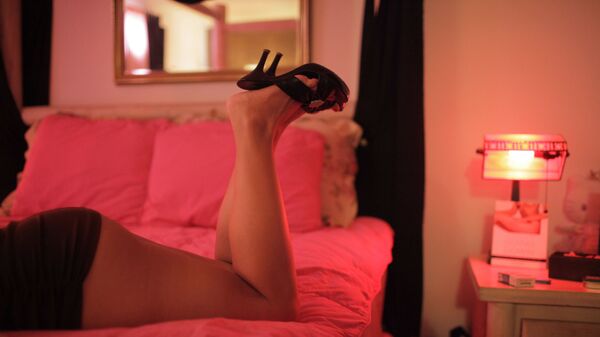 © AP Photo / Jae C. Hong
Subscribe
Many British sex workers have been hard hit by the current pandemic due to their inability to entertain patrons. Given the meagre prospects offered by webcam work, some have been forced to rely on a group set up by their fellow prostitutes to make it through.

An emergency fund has been set up by a UK sex workers-led advocacy group to help British prostitutes who have been left without an income during the pandemic, Sky News reported, citing the group’s statement.

Sex Worker and Resistance Movement (SWARM) was founded and led by workers in the industry who have been fighting for the rights and safety of those involved in the provision of sexual services. The emergency hardship fund set up by the collective has already helped more than two hundred people with “crisis grants”, according to the group, and there are 300 more sex workers currently waiting for the financial assistance to help them survive during the crisis.

We're pleased to announce that we have now been able to make hardship payments to 234 sex workers in the UK who are in crisis since launching the fund - but there are currently 300+ more on the waiting list and the need is still incredibly urgent. https://t.co/zQADbRiQEz

Many prostitutes in the UK have been left without an income by the coronavirus pandemic, due to stay-at-home orders and self-isolation measures, prompting many of their patrons to forgo purchasing sexual services for a while.

“Due to the coronavirus pandemic, sex workers across the UK have seen their industry evaporate almost overnight”, the group earlier wrote on Twitter. “We know the impact has been severe based on the hundreds of stories we've heard in the last two weeks. That's why we set up this hardship fund."

SWARP argued that there has been a rise in online sex work in the last two weeks as many prostitutes have turned to their computers “in order to survive”, but even this option was limited for many.

'Lizzy', a British sex worker with ten years' experience, praised the SWARM’s initiative. She told Sky News that she was hoping to earn some money from webcamming while staying at home, but “it’s very quiet at the moment” either because many people have also lost their income, or it was difficult to engage in online sex for some clients as they were staying at home with their families.

“Being stuck at home with anyone - wife or housemates or grown children, can make it extremely uncomfortable I'd imagine, especially if it involves things like cam or phone which can be easily overheard!”, Lizzy argued.

She has been forced to apply for “universal credit” due to the downturn, as she had already spent most of her savings during the usually “quiet” months of January and February, which were particularly difficult this year due to storms and flooding in the UK. Now, the coronavirus pandemic has made it almost impossible for her to survive, as she has not seen any clients in the last two weeks.

“Most sex workers are indoor workers, which means we either do outcalls to someone's home or hotel, or take incalls in our own premises,” Lizzy explained. 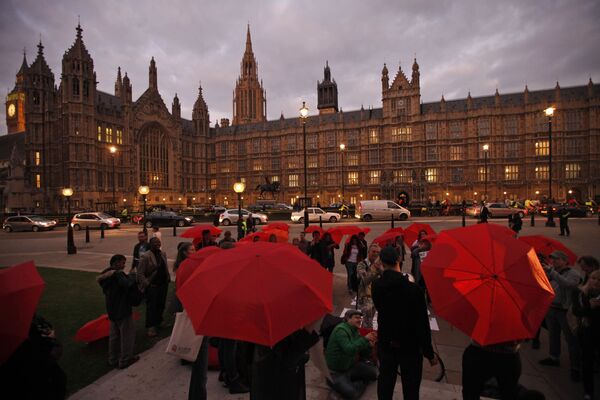 Sex workers and supporters demonstrate for the decriminalization and labour rights for all sex workers in the UK, during a rally across from the Houses of Parliament in central London, Thursday, Oct. 13, 2011
© AP Photo / Lefteris Pitarakis

“When people are told to stay home it stops us travelling to clients and clients travelling to us, and obviously the advice to stay two meters away from anyone not in your household makes having sex with strangers pretty impossible anyway!”

Thousands of Prostitutes Are Left Homeless in Germany as Brothels Shut Down Amid Pandemic – Report
It is illegal in the UK to solicit sex in public, but buying and selling sex is legal. Nevertheless, many sex workers prefer utter discretion, so the exact numbers of those providing sexual services is unknown. However, the number has been estimated at around 70, 000 in previous years.

Many advocacy groups are now calling upon the government to help sex workers with emergency money and benefits during the time of the pandemic, which has already taken the lives of more than 3,500 people in the UK.