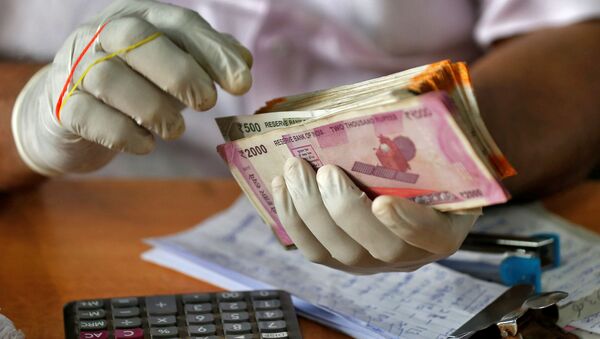 Ashutosh Kumar
Sputnik correspondent
All materialsWrite to the author
New Delhi (Sputnik): Indian Prime Minister Narendra Modi has declared a 21-day Covid-19 national lockdown since 25 March. The government has also announced entitlements such as cash transfer and food as relief to the marginalised segments of the society. Indian finance ministry will soon announce a stimulus package.

As Indian businesses and industries are currently marooned due to the impact of COVID-19, all eyes are at the Indian finance ministry, which has announced a relief package for marginalised segments of society and is likely to announce an industrial stimulus package soon.

A number of agencies have projected that Indian growth will take a massive hit: the United Nations Conference on Trade and Development (UNCTAD) has pegged losses to India attributable to COVID-19 at $50 billion.

In an interview with Sputnik, Bipul Chatterjee, Executive Director of the research and advocacy organisation Consumer Unity and Trust Society (CUTS) International, a policy research and advocacy organisation, argues that the losses on account of COVID-19 are greater than the UNCTAD projections as a large segment of the Indian economy is in the informal sector, which does not get represented in any macro-modelling. He anticipates the losses to be around $90 billion.

Sputnik: How deep is the impact of COVID-19 on the economy as well as trade? Even before this virus, there was a slowdown in the Indian economy and the pandemic has only aggravated the crisis; what is your assessment of the impact?

Bipul Chatterjee: I think the impact is going to be quite deep. We have yet to actually gauge the final impact. It will certainly spill over various sectors for over a period of time.

India’s Defence Research Body Makes Equipment for Effective Sanitisation of Public Spaces - Video
The United Nations Conference on Trade and Development (UNCTAD) has made an estimate of the losses that India may face on account of the pandemic. UNCTAD’s initial estimate on the losses to the Indian economy is about $50 billion.

My prognosis is that the losses to the Indian economy will be to the tune of $90 billion, which is about three percent of India’s Gross Domestic Product (GDP). Some of the sectors that are going to be highly impacted are the auto industry, manufacturing, aviation, real estate and steel, among others. Specifically, the sectors that are dependent on inputs from China will be impacted by the COVID-19 pandemic.

Sputnik: What makes you say that the economic loss to India on account of COVID-19 will be higher than UNCTAD’s assessment?

Bipul Chatterjee: There are two aspects to it. First, UNCTAD compiled its report in the third week of March, when the pandemic was unfolding. Secondly, even though the macro-modelling is useful, it just takes into account the formal economy. But a large part of India is an informal economy. So that way I may be estimating a little bit on the higher side, but that is my prognosis.

Sputnik: A number of initiatives have been taken by the government as well as Reserve Bank of India. Measures have been announced for the marginalised segments and the RBI has cut benchmark rates for industry. Are these enough?

Bipul Chatterjee: Certainly the initiatives are not enough. But it is a work in progress. I think another announcement may be on the way. The first announcement made by finance minister Nirmala Sitharaman was meant for the marginalised section of the society. Then the RBI announcement on benchmark rates was meant for the business but more on the macro level. Now, I guess there is going to be a third set of measures that will be more sector-specific.

The question is how the measures already announced will play out on the ground. That is a big question and my answer is that it will certainly have better impact than in the past. But it will certainly test the quality of our government, particularly at the ground level. In today’s India, I do not think there is a shortage of money. It is the quality of governance that matters.

Sputnik: It is evident that an economic stimulus package may be announced by the government. What additional measures need to be taken in the upcoming package?

Bipul Chatterjee: At the end of the day, the cost of inputs needs to be reduced., Indian manufacturers are not competitive because our cost of production is high. In the short term, the government should provide stimulus in the form of tax breaks and link it with the employment figure generated by the manufacturing sector.

India Activates Its Military Assets for Efforts Against COVID-19 in Indian Ocean
In the long term, this is an opportunity to push for certain reforms, particularly in our input markets.

The electricity cost for the industrial sector is too high. The capital cost is higher than in any other country. Some of these input side reforms must be thought about by the government.

The government needs to look at the sectors that are badly affected. First, we need to rescue them and then provide them relief, like tax breaks, and rehabilitate them through reforms. All these things have to be done in the next two to three years.

Sputnik: The national lockdown has caused a lot of disruption in the labour market. Do you see the labour coming back to the industrial clusters in the near future?

Bipul Chatterjee: Labour will not come back in the next two three months. Some of them will also get involved in farming in the rural sector. There is a psychological factor also that is playing. In villages there won’t be any want for food. Industry, for its part, may opt for further automation. That could be the long-term implication.

Bipul Chatterjee: I don’t see much recovery before the third quarter of financial year 2020-21. UNCTAD has estimated that aside from India and China, all other major economies will be in recession by the end of this calendar year.

Sputnik: What kind of trade disruptions do you see? Any advantage for India?

Bipul Chatterjee: Some disruption has already taken place. We have seen some companies relocating to India. I think a new kind of global value chain is going to emerge in which the major role may be played by Russia, India, and China.