‘Classy as Ever’: Netizens Slam Trump for Joking While Discussing US COVID-19 Death Toll 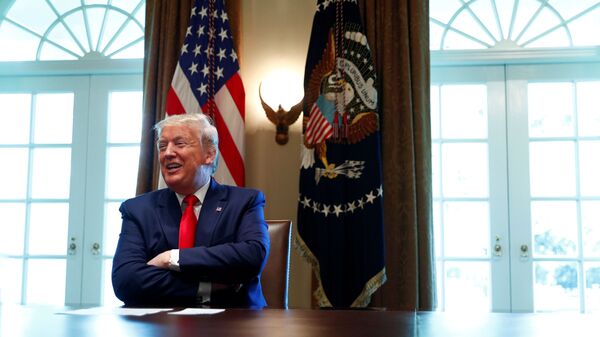 US President Donald Trump’s attempt at comic relief fell flat for netizens Friday evening when he interrupted the COVID-19 novel coronavirus task force briefing and began cracking jokes about his playboy past.

Dr. Deborah Birx, response coordinator for the White House Coronavirus Task Force, had her statement cut short on April 3 as 45 took it upon himself to explain the “curve” and lay out his projected death toll for the country.

“The models show hundreds of thousands of people are going to die. You know what I want to do? I want to come way under the models. The professionals did the models. I was never involved in a model. But- at least this kind of model,” he quipped, noting that he wants the COVID-19 deaths to total zero - which is literally impossible at this point.

Trump: The professionals did the models. I was never involved in a model, at least this kind of model. pic.twitter.com/XerAFIvWFU

Considering the US president’s lax rhetoric throughout the pandemic and the fact that the US accounts for more than a quarter of global confirmed coronavirus cases, it’s no surprise that netizens had no time for Trump’s jokes.

Trump is joking about models.

Americans are dying and Donald Trump is up there joking about how he banged a model or raped a model or something.

Trump slips in a joke about banging a model into his discussion of mass mortality.

Trump just said “I was never involved with the models, I mean - not this type of model”...Looks like unfortunately he is the only comic getting stage time right now. pic.twitter.com/D8lhjGQ51K

“The professionals developed the models. I was never involved in a model... at least this kind of a model,” Donald Trump debasing women in the middle of a riff about how hundreds of thousands of Americans may die from the coronavirus.

On modelling predicted death rate in USA from coronavirus Trump said "I was never involved in a model... this kind of model"

So many mourning and Trump has jokes about models.

So funny. I hope this is playing in the NYC ICUs so the COVID-19 patients can get a chuckle

During Friday’s briefing, Trump also let it be known that he was not going to allow the US Centers for Disease Control and Prevention’s (CDC) new face mask guidelines to interfere with his presidential fashion.

When asked why he was opposed to wearing a "non-medical cloth," as recommended by the CDC, Trump said that he is “feeling good” and could not see himself donning a mask as he greets “presidents, prime ministers, dictators, kings, queens.”