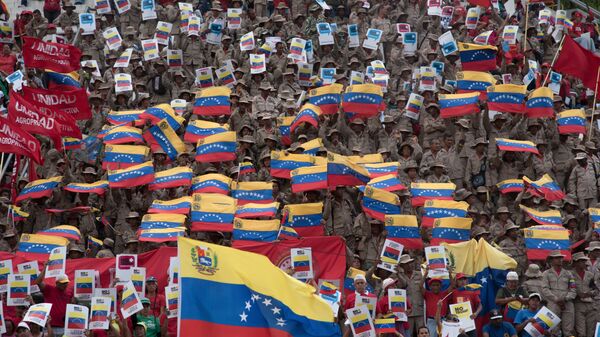 BUENOS AIRES (Sputnik) - Venezuela is condemning the European Union's endorsement of the United States' proposal to establish a transitional government in the Latin American country as silence in the face of Washington's "aggression against Venezuelan sovereignty," Venezuelan Foreign Minister Gorge Arreaza has said.

"Venezuela condemns the support by the EU of unconstitutional and interventionist US initiatives. [Venezuela] condemns the EU's silence in the face of the [US President Donald] Trump administration's aggression against Venezuelan sovereignty," Arreaza wrote on Twitter.

In March, the United States voiced the proposal to establish an interim government in Venezuela as part of a broader plan to resolve the Venezuelan crisis through what US Secretary of State Mike Pompeo called a peaceful democratic transition. The EU has endorsed the proposal as coinciding with its own views on how to achieve peace in Venezuela through negotiations.

Under Washington's Democratic Transition Framework for Venezuela, the interim Venezuelan government would consist of National Assembly members agreed by both the incumbent Venezuelan government and the opposition. Washington said it would lift sanctions from the Latin American country if the plan was observed, including its part on holding presidential and general elections in 6-12 months.

The political situation in Venezuela derailed in January 2019 after opposition leader Juan Guaido proclaimed himself interim president. Several countries, including the US, endorsed him as Venezuela's leader and urged the incumbent president, Nicolas Maduro, to step down.

The US then imposed several rounds of sanctions against Venezuelan officials and entities, blocking $7 billion in assets belonging to Venezuela's national oil and gas company Petroleos de Venezuela (PDVSA) and its subsidiaries. Maduro, whose presidency was supported by Russia and China, among other states, has denounced the sanctions as an illegal attempt to seize the country’s sovereign assets.