Trump: CDC Advising Voluntary Use of Cloth Masks for Americans 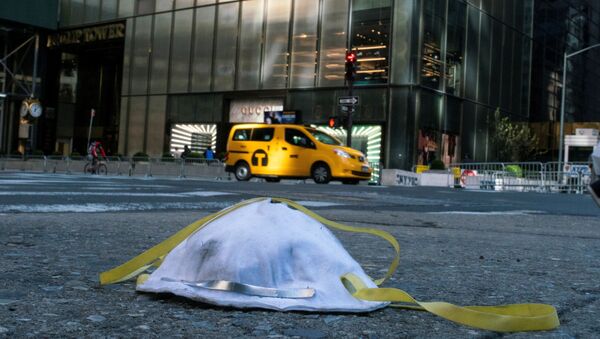 US President Donald Trump indicated in a Friday briefing that Americans would soon receive directions from the Centers for Disease Control and Prevention (CDC) urging the voluntary wearing of homemade cloth masks to stem the spread of the COVID-19 virus.

Trump told reporters at the White House on Friday that a message from the CDC would soon be released urging the universal voluntary wearing of cloth masks.

However, Trump said, "I don't think I'm going to be doing it."

"The masks is going to be really a voluntary thing, you can do it … I’m choosing not to do it … it’s voluntary."

"I just don't want to wear one myself," Trump told a reporter who asked why he would not be wearing a mask. "I just don't want to ... somehow sitting in the Oval Office, behind that beautiful, great resolute desk, I think wearing a face mask as I greet presidents, prime ministers, dictators, kings, queens - I dunno, somehow I don't see it for myself."

He further noted that Americans should not bother with surgical-grade masks, so as to save them for medical staff, and that homemade cloth masks would suffice. The masks, he urged, would not take the place of previous social distancing directives, which advised Americans to stay at least six feet apart during the crisis.

"I'm also signing a directive invoking the Defense Production Act to prohibit the export of scarce health and medical supplies by unscrupulous actors and profiteers," Trump said at the White House. "The Secretary of Homeland Security will work with FEMA [Federal Emergency Management Agency] to prohibit the export of N95 respirator surgical masks, gloves and other personal protective equipment. We need these items immediately for domestic use."

US Vice President Mike Pence, who heads the administration's Coronavirus Task Force, said that there is already evidence that government guidelines aimed at preventing the spread of the novel coronavirus were working, as the rates of increase of cases in several hotspots, such as Washington state, have begun to decline.

Dr. Deborah Birx noted there were still many places being closely watched by the task force, such as Colorado; Detroit, Michigan; and the District of Columbia, as they have the potential to quickly develop into more serious outbreaks.