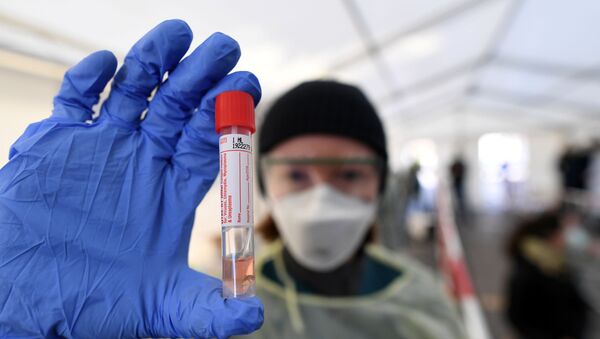 Victoria Teets
All materialsWrite to the author
Despite the real danger of the COVID-19 pandemic that has hit the US hard, with the country now having the most confirmed cases of the virus in the world, nefarious parties still exist that aim to profit from the tragedy. Law enforcement in Kentucky is now investigating sham, pop-up coronavirus testing sites.

It started with price gouging for in-demand items such as hand sanitizer and face masks online amid the coronavirus frenzy. Capitalizing on people’s fears, opportunists and scammers have since developed more elaborate operations by setting up fraudulent COVID-19 testing sites after drive-thru testing in places such as shopping center parking lots around the country became common.

In Louisville, Kentucky, city and state officials are telling residents to avoid sites for testing that the Metro Council president has characterized as "scams.” According to the Courier-Journal, these fraudulent testing sites have opened in various locations around the city, with two medical marketing companies soliciting coronavirus tests, including one that promises results in 24 hours. Individuals who exhibit symptoms are reportedly charged up to $250 per test.

Louisville Mayor Greg Fischer's office said that the city government has received calls about multiple pop-up testing sites that police are investigating for "further review and possible action.” One of the organizations was operating out of a church parking lot, offering limited testing at a cost of $200, although it included testing for 19 other pathogens. The church asked the company not to return as of Wednesday.

Jessica Wethington, a spokesperson for the city, stated that "at this time, we are advising residents experiencing symptoms to seek COVID-19 testing from hospitals, health care providers or government resources.”

Shannon Wilson, one victim of fake COVID-19 testing in Louisville, told local news outlet Wave 3 that those running the scheme were in full medical get-ups with white uniforms and masks, even giving her a mask because they didn’t want her coughing on them. She told the outlet that she was asked a series of questions by women who were dressed as nurses and had to pay $40 to speak to a supposed doctor over the phone, who said she could be tested for the virus for an additional $200. Afterwards, the workers swabbed her throat, but the COVID-19 test ended up being fake.

After experiencing the scam, Wilson ended up having to go to a hospital to get a legitimate test. “People are terrified,” she said. “I am terrified that I’m going to die in my sleep and leave my kids alone so that’s why I went. Then to find out that they didn’t help me.”

”You just have to be leery, because these people are truly demonic,” Wilson stated, adding that she expects to get the results of her actual test back from the hospital next week.