In San Francisco, You Wait Out the Pandemic at Home. If You Don’t Have One, Bed Down in a Hotel 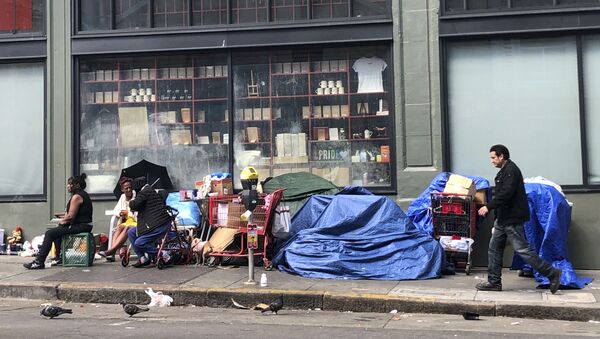 © REUTERS / Juliet Williams
Subscribe
Just like the rest of California, San Francisco is under a stay-at-home order as the government is trying to reduce the rate of transmission of the novel coronavirus. The pandemic has put the city’s homeless population – one of the largest in the country – at risk, so the local authorities are scrambling for solutions to have them sheltered.

San Francisco has moved to accommodate its homeless people in hotel rooms that are currently vacant because of the COVID-19 pandemic.

Trent Rhorer, the head of the city’s Human Services Agency, announced on Wednesday that authorities would lease a thousand rooms by the following day to provide shelter for the homeless people and for the health workers who have tested positive for the coronavirus or are suspected of having it and need isolation space away from their families.

Rohrer said that 479 hotel rooms were currently leased, and 123 people had already moved in. As many as 94 percent of those are homeless, he added.

San Francisco is said to have reached lease agreements with six hotels, and negotiations are underway with dozens more. Three hotels are expected to sign up by the end of the week, bringing the total number of available rooms to more than 2,500. The city would not name the hotels out of privacy concerns.

“The contract terms and duration vary by hotel,” Rhorer told the SFGate daily. “Each of the contracts are negotiated individually between the City and hotel ownership.”

Recent estimates suggested that 8,500 hotel rooms can be made available to homeless residents, healthcare workers and first-responders.

On 20 March, California declared a statewide order that required its 40 million residents to stay at home except for when attending to essential needs. Schools, restaurants and bars have been closed as well. Earlier this week, most of the San Francisco Bay Area jurisdictions extended the previous stay-at-home order from 7 April to 3 May.

There is a lack of certainty over what to do with California’s homeless population, which exceeds 151,000 across the state and 8,000 in San Francisco alone. More than two-thirds of them are unsheltered and living in poor sanitary conditions, meaning that they are at a higher risk of contracting the coronavirus.

The CDC guidelines advise against breaking up homeless encampments during a pandemic and moving them into temporary housing units unless they can distance themselves from one another once inside. Placing them into hotels could help free up space and create necessary buffers inside otherwise tightly-packed shelters.

California Governor Gavin Newsom has authorised $150 million in emergency funding for local cities to shelter or quarantine homeless people. That includes the funds to buy trailers and lease hotel and motel rooms.

San Francisco Mayor London Breed said, however, that authorities don’t have the ability to force the homeless to stay in hotels during the pandemic.

The city has reported 434 confirmed COVID-19 cases so far. A seventh death was confirmed on Wednesday.

000000
Popular comments
Believe this fake news Mass Media Propagated Hysteria Propaganda At Your own Peril!!!!! Doctors and nurses working at hospitals categorically REJECT the completely fake news about the number of infected and the number of deaths reported by hired Fake News Reporters!!!! Nobody in highest political positions cared about the 290 000 to 650 000 people - flu victims, who dropped dead EVERY YEAR. But now, the US Fort Detrick biolab released their precious Covid virus, designed to mass mind control, which backfired and only now governments are in panic about 40 000 deaths so far???? Where was their panic last year about the 290 000 to 650 000 people who died world-wide? Where was their hysteria, like now??? Where was this mass hysteria last year, then in 2018, 2017, 2016 and earlier??? Globally, the World Health Organization (WHO) estimates that the flu kills 290 000 to 650 000 people PER YEAR. It is April now and global death toll is at 40 000, so how is the current mortality gonna compare?????? Big Pharma Owning Governments was so inhuman last year and years before that they forgot to organize this ridiculous mass hysteria in 2019 and before EVERY YEAR 290 000 to 650 000 people dropped dead, but only NOW we are seeing this mass hysteria about a regular flu which is obviously going to be less deadly than years before???

nereas
2 April 2020, 14:37 GMT
000000
Since tourism and business trips have dropped to near zero levels. Most hotels in San Francisco. Have a massive surplus of rooms availaible for the next six months.