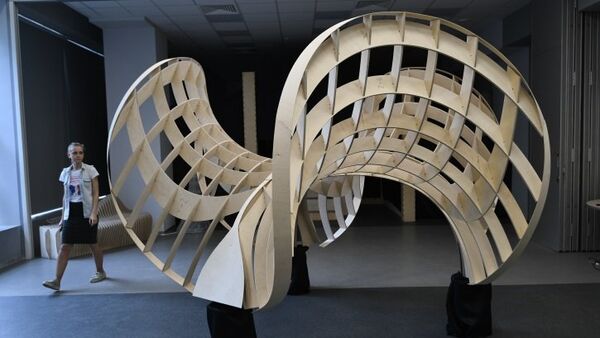 Demond Cureton
All materialsWrite to the author
Crises such as the coronavirus pandemic, economic recession and resource shortages, among others, are being confronted with radical new technologies and ideas. Innovative approaches such as artificial intelligence, neuroscience, blockchain and universal basic income are growing in popularity as solutions for problems affecting modern humanity.

David W Wood, chairman of London Futurists, Symbian co-founder, author and transhumanist advocate, has told in an interview with Sputnik about his new book 'RAFT 2035: Roadmap to Abundance Flourishing and Transcendence by 2035' and greater implications for the radical Future Studies movement in the information age.

Sputnik: For those new to futurism, how would you describe it?

David W Wood: Futurism is the study of future scenarios, with a view to changing present-day activities to increase the chance of a better future.

Scenarios are built by identifying current trends and imaginatively considering how they might develop and then overlap and interact with each other.

For each scenario, futurism seeks to answer three questions, namely determining how credible technological changes and their associated human choices are, secondly, how desirable such changes are while avoiding being misled by intuitive reactions like "wow" or "yuk", and thirdly, what can be done to increase the chance of positive scenarios while decreasing negative ones.

Sputnik: What has been your role in building a futurist/ transhumanist movement in the UK?

David W Wood: I’ve been organising regular meetings in Central London on futurist and transhumanist topics since March 2008. The London Futurists meetup, which I chair, has over 8,000 members.

I describe myself as a “radical real-world futurist”, with 'radical' meaning I take seriously the potential for very significant changes in the human condition within just a few decades, which is unlikely to be a simple extension of the current situation.

In particular, I take seriously the possibility of 'transhumanist' changes such as the abolition of ageing, the advent of artificial super-intelligence, the advent of a post-work society, the achievement of a sustainable superabundance, and the raising of human consciousness to profound new levels of awareness and fulfilment.

Being “real-world” means that I recognise that technological possibilities are strongly constrained and shaped by human factors, including economics, politics, and philosophy.

Without considering these human and social factors, projections of technological progress are very unreliable.

Sputnik: Your latest book, 'RAFT 2035', builds a theoretical roadmap towards creating a society of flourishing and transcendence. How does it differ from prior schools of thought such as Socialism, Realpolitik and even Jacques Fresco's Venus project? Which problems does it hope to solve and using which methodologies?

David W Wood: There are lots of connected points with other schools of thought, and I see RAFT 2035 as integrating and elevating many key aspects of these other schools.

The RAFT methodologies can be described as technoprogressive, rational, data-driven, iterative, human-focused, diversity-embracing, and collaborative.

The starting point for RAFT is the remarkable potential of key technological innovations being accelerating by the fourth industrial revolution, namely nanotech, biotech, infotech, and cognotech. These will enable larger changes in the next 15 to 20 years than in any previous 15 to 20 period in history.

They can provide liberation from constraints of our inherited human condition that people never expected to overcome, such as constraints in our bodily weaknesses, mental frailties, emotional makeup, and social relationships.

On this basis, RAFT looks at transformations in six sectors of human flourishing: individual health, social relationships, international connections, environmental well-being, cosmic outlook, and political dynamics. These sectors overlap and interact, and all require progress. Happily, progress in one area can assist progress in the other sectors.

These transformations consist of 15 goals or desirable outcomes for 2035. They're bold aspirations which I claim are credible, given wise use of technology and sufficient attention to the connections between the different sectors. For each goal, RAFT also proposes two short-term interim goals to be accomplished by 2025, en route to the larger 2035 vision.

In this way, RAFT seeks to raise public attention to the larger progress that can be made, once people stop obsessing over present-day divisions and distractions that ultimately are much less significant.

Sputnik: Is there a danger in believing in an "infallible" role of technology? What are the dangers of doing so and who would stand by to audit those building/ implementing them?

All technologies, no matter if fire, electricity, chemistry, nuclear, gene-editing, AI, and so on, are two-edged swords. Whether a technology ends up hugely benefiting or harming humanity isn’t determined by the technology itself. It needs wise human judgement, including monitoring and regulations.

Secondly, whether new technology develops quickly enough often depends on investments beyond what the free market, by itself, will be willing to make. It requires public investment in fundamentals and in infrastructure. There’s nothing inevitable about the outcome.

Although companies delivering breakthrough technologies often start off by serving public needs, they may well evolve into serving their own shareholder needs. As they gain more power, these companies may act in increasingly monopolistic ways. That’s why democratic government oversight is needed. It should be “technology of the people, by the people, for the people”.

We’ll need to pull together the very best of “Humanity 1.0” to enable us to progress to the “Humanity 2.0” within our grasp.

Sputnik: As the coronavirus pandemic is dominating the media, let's use a hypothetical scenario as a case study. How would futurism be equipped to tackle the outbreak and how would it differ from current methodologies?

David W Wood: Futurism has a long history of reviewing and anticipating existential threats and other global catastrophic risks. The current pandemic crisis can act as a wake-up call, by highlighting the fragility and unsustainability of present human systems. Suddenly more and more people are wondering what options there are to avoid worse risks in the near future.

There’s an awareness that, to the extent that Covid-19 provides a dress rehearsal for a bigger challenge ahead, humanity is presently failing that dress rehearsal. On account of this awareness, futurist ideas which were previously fringe are now being discussed much more widely.

This includes the adoption of universal basic income, accelerating the use of virtual and remote participation technologies, embracing AI to develop vaccines and other medical cures more rapidly, and many others.

Other issues being highlighted by futurism are constructing new buildings at much greater speed, avoidance of food production methods that involve large-scale slaughter of farm animals, sharing scientific data openly without paywalls, prioritisation of metrics other than GDP to assess the success of national economies.

Futurist ideas such as using collective intelligence to promote crowd-sourced solutions rather than destructive fake news, taking a global perspective rather than a race-to-the-bottom “my country first” approach, and addressing ageing as a common cause of multiple diseases being more dangerous, rather than as individual diseases, are now becoming mainstream.