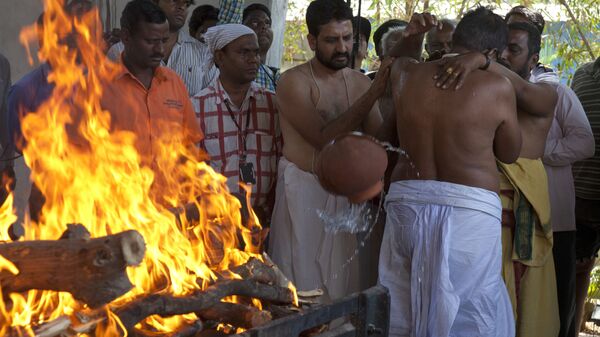 New Delhi (Sputnik): As COVID-19 death toll rises across the globe, several countries have turned to cremation as an alternative to burial. The nature of COVID-19 means the virus dies with the host but it is feared that traces may remain on the body.

A top Muslim cleric in India has sternly warned that they will not allow the cremation of Muslims who die of COVID-19 in the country. Syed Ahmed Bukhari, the Shahi Imam (head) of one of the largest mosques of country, said that not a single Muslim will be cremated.

“We are against the idea and we will not let this happen. It is against our faith. They can adopt other means to sanitise the body before burial,” Syed Ahmed Bukhari, head cleric of Jama Masjid of Delhi said.

Earlier, Vishwa Hindu Parishad — a major Hindu group and close ally of India's ruling government — advocated the cremation of the bodies of COVID-19 victims as a means of eliminating the virus from environment.

Vinod Bansal, spokesperson of the VHP, said that the government must set religious concerns aside while dealing with the pandemic that has left at least 38 people in India so dead far while 1,637 people have been found infected with the virus.

“There are scientific reasons behind our demand. There are some evidence which suggest that only burning the body kills the virus, otherwise the deadly virus can spread into the environment,” Bansal told Sputnik. Cremation is considered haram (forbidden) in Islam, as it is viewed as a desecration of the deceased.

The statement came as the number of coronavirus-positive cases in the country continues to rise after an Islamic organisation, Tablighi Jamaat, had organised a religious gathering in the national capital and later found there were people infected with coronavirus who had participated in the event.

As many as nine people associated with the Islamic organisation have died due to COVID-19 and many others have tested positive while there are hundreds of suspected cases.

Bansal added that China has implemented the same policy; Beijing has banned funerals throughout the country since 1 February and all the bodies have been taken to crematorium.

It is reported by media that local authorities in Argentina had cremated a Jewish victim despite the disapproval of the nation's Jewish community.

The VHP — which fights for Hindu causes across the globe — also demanded the closure of all mosques in the country with immediate effect.

“All the religious places except mosques have been closed after the announcement of lockdown across the country. We demand the closure of every mosque throughout the country, with immediate effect,” Bansal added.

The VHP also demanded that legal action be taken out against the Islamic preachers who had 'invaded' country, entering on tourist visas.

India's Home Ministry has taken a strong stance against the Tablighi Jamaat and ordered the deportation of all foreigners who had arrived in India on tourist visas. As per the ministry, about 2,000 foreigners on tourist visas from over 70 countries are spread all over the country conductinng Tabligh work.