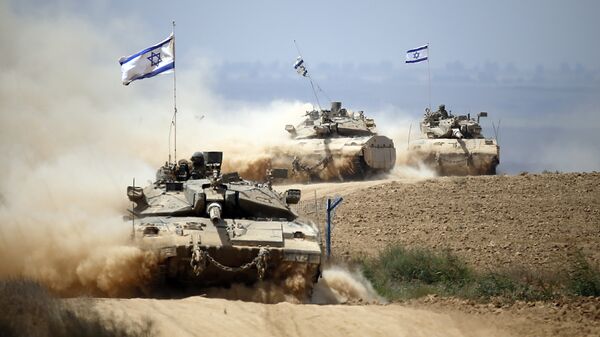 Ilya Tsukanov
All materialsWrite to the author
Israel has nearly 5,600 confirmed cases of COVID-19, and has joined countries around the world in going into lockdown mode to try to curb the virus’s spread.

The Twitter account of the Israel Defence Forces (IDF) has shown off the military’s efforts to do its part to battle the coronavirus, posting photos of an IDF armory ordinarily engaged in the production of “tank parts and body armour” to make “protective googles for medical staff and spray guns for sanitizing public spaces.”

The IDF did not specify the location of the manufacturing center. However, a day earlier, Israeli media reported that that the Tank Rehabilitation and Maintenance Center in Tel Shahomer outside Tel Aviv has begun production of 1,400 pairs of protective goggles per day in a bid to reduce protective facemask shortages.

Ordinarily, the facility produces Israel’s Merkava tanks, as well as other armoured vehicles, and communications equipment for the ground forces. The order to convert its capacity was given in late March, with other military facilities, including a vehicle factory in Haifa, now producing equipment to help fight COVID-19.

Israel’s military has joined the rest of the country in being forced to take measures against the COVID-19 outbreak, with multiple senior generals quarantined after attending a meeting where a reserves commander testing positive for the virus participated. On Wednesday, the military issued a statement that IDF Chief of Staff Aviv Kochavi tested negative for the virus, but would remain in isolation.

Despite the preventative measures, the IDF has continued limited military and training operations, engaging in air force drills with US jets late last month, and allegedly taking part in fresh strikes against Syria late Tuesday, firing missiles at targets in Homs region.

Amid efforts to contain the virus, Israel’s economy has been hit hard, with nearly a quarter of working age Israelis claiming unemployment benefits in March amid the shutdown. At the same time, observers have warned that any further tightening of lockdown measures could lead to over 140 billion sheckels ($39 billion) in lost GDP, and a potential explosion in suicide rates, crime and violence.