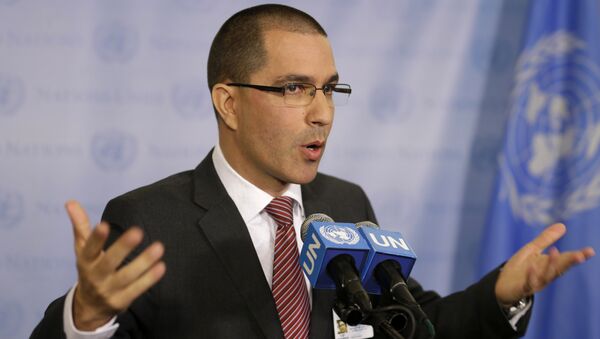 BUENOS AIRES (Sputnik) - Venezuelan Foreign Minister Jorge Arreaza rejected firmly on Tuesday Washington's crisis settlement plan, which envisions the creation of an interim government and elections within the next year.

"Amid the US Department of State's attempts to set up a ... controlled government in our country, the Bolivarian government insists that it is not accepting and will never accept any tutorship from any foreign government", Arreaza wrote on Twitter.

Russian ambassador to Venezuela Sergey Melik-Bagdasarov also commented on the US settlement plan. saying it was a positive signal of readiness to lift the sanctions imposed on Venezuela, but indicated that ultimatums are unlikely to solve domestic political problems.

The ambassador pointed out that Venezuelans should find their own solutions to domestic political problems within the national legislative framework and through a dialogue between the responsible political forces.

"As for the US' readiness to cancel unilateral restrictions, which make suffer the less protected part of the population first of all, this is a positive signal. However, I will say once again that only Venezuelan citizens can make decisions on the fate of their country", Melik-Bagdasarov said.

He noted that constructive cooperation by the global community would be welcomed anyway, if the participants of the negotiations were interested.

"Unilateral public statements, especially ultimatums, can hardly be listed as such effort. Such instruments of political pressure, of meddling into foreign countries' domestic affairs, have repeatedly proven inefficient", Melik-Bagdasarov added.

US Secretary of State Mike Pompeo said earlier in the day that an interim government could be established in Venezuela, consisting of National Assembly members and accepted by both Caracas and the opposition. This new transitional government could serve until the next presidential and National Assembly elections, according to Pompeo, who also said the US would remove its sanctions if the conditions of this plan were met.

The political situation in Venezuela worsened back in January 2019 when opposition leader Juan Guiado illegally proclaimed himself interim president of Venezuela after disputing the results of the May 2018 election in which President Nicolas Maduro had won. Guaido was endorsed by the United States and its allies in Latin America.

Maduro has called Guaido a US puppet who is trying to orchestrate a coup in Venezuela with the help of the United States so that Washington can gain control of Venezuela's natural resources, namely its vast oil assets.

The US has repeatedly characterized Venezuela under Maduro as a "dictatorship" where the citizens "suffer repression", promising to return democracy to the country. Washington has also introduced a series of economic sanctions against Caracas, including those against certain individuals linked to the Maduro government, as part of a pressure campaign for regime change.