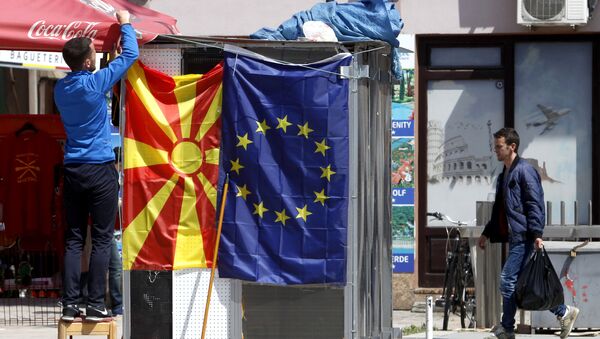 MOSCOW (Sputnik) - North Macedonia's admission to NATO will neither strengthen the regional security nor assist the fight against new threats, including the coronavirus, the Russian Foreign Ministry said on Tuesday.

"Obviously, the fact that Skopje has joined the alliance does not add any value either to European or to regional or to national security. This move will certainly not promote the joining of effort for fighting common threats and challenges, including the coronavirus pandemic. This will only create new separation lines", the Russian Foreign Ministry said in a statement.

The ministry added it had not seen any viable explanation of the need for North Macedonia to join NATO.

EU Greenlights Start of Accession Talks With Albania, North Macedonia - Commissioner
On 27 March, North Macedonia officially joined NATO as its 30th member, when the instrument for its accession to the Washington Treaty was formally deposited with the US State Department. The ceremony when the country's flag was flown had NATO Secretary General Jens Stoltenberg and Chargé d'Affaires of the North Macedonian delegation to NATO, Zoran Todorov, in attendance.

This past weekend, the ruling Social-Democratic Union said that NATO membership would help the country tackle COVID-19, specifically by using the Next-Generation Incident Command System to coordinate its response and ensure timely public awareness.