'Very Painful': Trump Aims to Keep COVID-19 Death Toll Below 200K in US 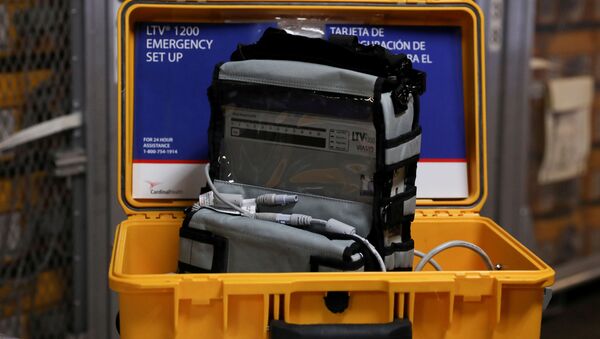 During a press conference Tuesday, US President Donald Trump revealed his administration hopes its mitigation efforts will keep the death toll from COVID-19 below 200,000 in the United States. He cautioned the worst two weeks are just beginning.

"The surge is coming, and it's coming pretty strong," Trump told reporters at the White House on Tuesday. He then revealed the US government is holding 10,000 ventilators in reserve.

In the US as of Tuesday, 183,000 people have been diagnosed with the novel coronavirus and more than 3,700 have died. For those who need them, ventilators are the difference between life and death, as the disease attacks the immune system.

Dr. Deborah Birx, an immunologist who is part of Trump's coronavirus task force, later noted that the US has roughly 200,000 ventilators across the country.

The statement came amid Trump's announcement his administration was reissuing health guidelines to "slow the spread" of the COVID-19 novel coronavirus across the country over the next 30 days. The administration previously issued a 15-day plan for social distancing and preventative hygiene, believing that lockdowns could begin to be lifted by the first weekend in April. However, those guidelines have now been extended through April as case numbers continue to skyrocket across the country.

​Experts who defended the administration's policy at the presser noted that such measures  could "flatten the curve" on graphs of cases and deaths reported. Birx estimated this could lower the death toll to 100,000 to 200,000 deaths in the United States from more than 2 million, which Trump later reiterated would have been the result if nothing was done to mitigate the spread.

However, Birx noted this could be substantially lower, as these are conclusions based on models that are based on other cities experiencing the same tidal wave of cases as New York, which is the epicenter of the US outbreak.

Birx said that deaths per day will climax in the next two weeks.

"It's absolutely critical for the American people to follow the guidelines for the next 30 days. It's a matter of life and death," Trump said. "We’re going to go through a very tough 2 weeks … this is going to be a very, very painful 2 weeks," he said. However, Trump anticipated a sudden downward shift in the number of cases as the efforts take effect. "It’s going to be a burst of light."

The model the White House is using on coronavirus shows a projected national peak in daily deaths on April 15, with 2,214 @abc15 pic.twitter.com/gR6xju5oR6

Things to Get Worse Before Getting Better

However, despite these measures, Dr. Anthony Fauci, director of the National Institute of Allergy and Infectious Diseases at the National Institutes of Health (NIH), cautioned that while these efforts begin to take their effect, the situation will continue to get worse for several weeks before they begin to get better.

"We gotta brace ourselves. We are continue to see things go up. We cannot be discouraged by that because the mitigation is actually working and will work," Fauci said.

"As sobering as a number that is, we should be prepared for it to be that much," Fauci said about the projected death toll. "I hope not. And I think the more we push on the mitigation, the less likely it would be that number."

US Vice President Mike Pence, who is heading the national coronavirus response task force, noted that more than 1.1 million Americans have been tested for COVID-19 so far and estimated that roughly 100,000 Americans are being tested per day.

Trump also noted his administration was continuing to look at travel bans on additional countries, including Brazil.

The administration has found itself caught in a vise: as businesses and stocks suffer catastrophic losses amid global declines in trade, corporate leaders has pushed for an end to lockdowns and a return to business as usual. At the same time, popular pressure from below has demanded even more stringent measures: tougher controls on social gatherings and more direct pressure on repurposing industries to produce necessary medical goods such as hospital gowns, masks, and ventilators.

On Friday, Trump signed into law a $2.2 trillion stimulus bill that included stimulus checks that would be mailed to families as well as loans to small businesses and substantial financial aid to industries impacted by the pandemic, such as the airline, hotel, and cruise line industries. It also provided for potentially $4 trillion in financial stabilization measures in conjunction with the Federal Reserve.

On Tuesday, the New York Stock Exchange closed with its indices recording some of their worst first quarters in history.