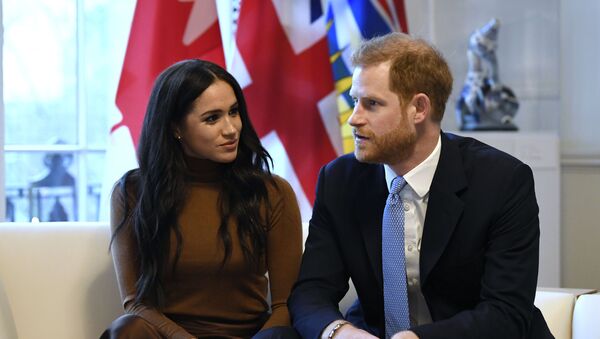 © AP Photo / Daniel Leal-Olivas
Subscribe
The soon-to-be ex royals are said to have been flown by a private jet from Canada, where they were initially set to stay permanently after the so-dubbed Megxit, to Los Angeles, as the US was preparing to introduce a strict lockdown due to the raging COVID-19 pandemic.

Prince Harry and Meghan Markle, who are due to formally quit their senior royal roles soon, have issued a reserved and straight-forward response to Donald Trump’s recent outburst over who will foot their security bills while the couple is in America.

An official spokeswoman for the Sussexes said they had "no plans" to ask the US government for resources, following months of speculation about who would pay for their security after the couple announced they were stepping down for the sake of individual and financial independence - a move referred to as Megxit.

“The Duke and Duchess of Sussex have no plans to ask the US government for security resources", the spokeswoman responded to Trump’s tweet after the couple and their son Archie relocated last week to a place near Hollywood from their rented home in Vancouver, as reported by People Magazine, before the border between the countries closed due to the coronavirus.

"Privately-funded security arrangements have been made", the spokeswoman specified.

POTUS earlier tweeted that US taxpayers would not be forking out for the couple's security following their recent move. “They must pay!” He issued a strong imperative.

The Royal Canadian Mounted Police previously confirmed that they would stop providing protection for the Sussexes once they cease to be senior royals, which is sue to happen on 31 March. Neither Buckingham Palace nor the Home Office confirmed details of the security arrangements if any, but the bill is reportedly estimated to amount to £20 million a year.

The coronavirus pandemic has, meanwhile, been sweeping around the whole globe for the past few months, having first been registered en masse in the Chinese province of Wuhan.

Governments have placed lockdowns on whole cities, with millions putting themselves in self-isolation to prevent the spread of the contagious disease.

According to fresh estimates published by worldometers.info, as many as 723,077 have been confirmed to have contracted the novel virus, including 33,983 deaths, a lion’s share in Italy and Spain.

The US ranks first in the number of confirmed cases - 142,637 across the nation, with the death tally hitting 2,485 to date.

000000
Popular comments
The British will pay one way or another.