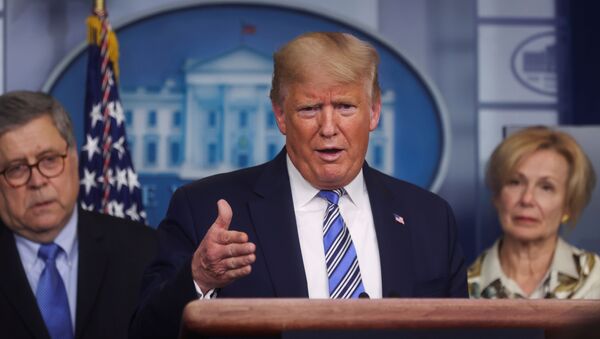 The speaker of the US House of Representatives is an ardent critic of the president and was one of the key figures behind the impeachment inquiry into Trump, which ended with his acquittal.

US President Donald Trump attacked Nancy Pelosi during an interview on “Fox & Friends”, calling the 80-year-old Democrat "a sick puppy". Trump’s remark came a day after Pelosi criticised him for underestimating the danger of the coronavirus outbreak on CNN’s State of the Union TV programme.

Trump called Pelosi’s comment a disgrace to the United States and her family. "It’s a sad thing. She’s got a lot of problems, and that’s a horrible thing to say", Trump said adding that Pelosi should focus on the area in San Francisco that she responsible for. "Her area where she lives has become like a slum", the president said.

Speaking on CNN on 29 March, Pelosi criticised Trump’s response to the outbreak of the COVID-19 virus in the United States. "As the president fiddles, people are dying. We just have to take every precaution. We had nearly 500 cases and 17 deaths already. And in that 20 days because we weren't prepared, we now have 2,000 deaths and 100,000 cases", Pelosi said.

Donald Trump’s remark about Nancy Pelosi was supported by many social media users, with some people saying that he gave the perfect description of Pelosi.

So freaken true!! I would add soulless

He is ABSOLUTELY correct.

​Others noted that the president’s comments were an insult… to puppies.

Thats an insult to a sick puppy pic.twitter.com/0fWaNyrKXp

FACT CHECK: Sick Pupies are still much nicer than Pelosi.

​Some netizens said that Pelosi’s criticism of Trump’s handling of the coronavirus outbreak had nothing to do with her caring about people and noted that the 80-year-old should instead focus on the problems in San Francisco.

Nancy Pelosi doesn't see this global pandemic as a tragedy. She sees it as a political opportunity. She is one sick puppy.

He’s not wrong. SF is littered with homeless, and it’s streets are filled with pooh and dirty needles. Also, Pelosi is a psycho hose beast.

Other users contended that the president was rude and couldn’t handle criticism.

"The most presidential president ever"

​The United States has the greatest number of confirmed coronavirus cases in the world – more than 139,000, CNN reported. This is more than in China, where the virus originated. The death toll in the US currently stands at more than 2,300.