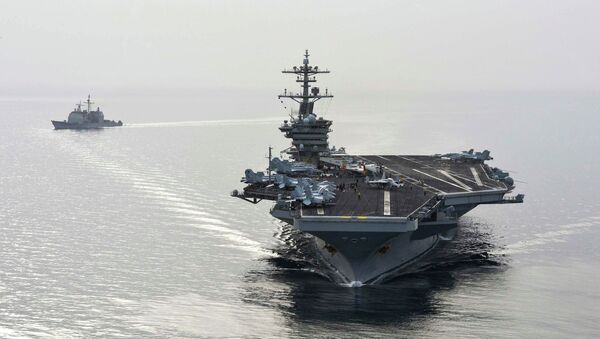 Oleg Burunov
All materialsWrite to the author
On Thursday, acting Secretary of the US Navy Thomas Modly stated that additional coronavirus cases had been registered on the USS Theodore Roosevelt aircraft carrier.

Admiral James Stavridis, former commander of the USS Theodore Roosevelt, has predicted that the coronavirus outbreak on board the vessel may ride roughshod over the US Navy’s combat capability.

“The Navy is headed into choppy waters in terms of readiness in the months ahead”, Stavridis was cited by Newsweek as saying on Saturday. The AP news agency reported in light of this that the USS Theodore Roosevelt is one of 11 active aircraft carriers to conduct missions aimed at preventing war with China or Iran.

Stavridis also referred to the warship’s tight sleeping quarters which he claimed had become "birthing compartments" for the spread of the coronavirus.

He spoke as Chief of Naval Operations Admiral Mike Gilday underscored that the Navy is “taking this [COVID-19] threat very seriously and working quickly to identify and isolate positive cases while preventing further spread of the virus aboard the ship”.

US aircraft carrier at sea now has 25 confirmed cases of #coronavirus.

This is up from just 3 reported yesterday.

There are now 25 sailors who have tested positive for coronavirus aboard the aircraft carrier USS Theodore Roosevelt. There are 5,000 personnel on board. pic.twitter.com/s4QT66DRXW

Gilday admitted that more positive COVID-19 cases are expected and that those who test positive will be transported to the US Naval Hospital in Guam.

"We're taking this day by day. Our top two priorities are taking care of our people and maintaining mission readiness. Both of those go hand in glove. We are confident that our aggressive response will keep USS Theodore Roosevelt able to respond to any crisis in the region”, he said.

The statement comes as the US Navy’s Acting Secretary Thomas Modly announced that additional coronavirus cases had been found on the aircraft carrier.

He said that the Navy is “in the process now of testing 100 percent of the crew […] to ensure that we are able to contain whatever spread might have occurred there on the ship”.

Given that the USS Theodore Roosevelt has about 5,000 personnel on board, “testing 100 percent of the crew” will almost certain be a formidable task.

Earlier this week, Modly said that three sailors on board the aircraft carrier had tested positive for COVID-19 about two weeks after visiting Vietnam, in what became the first coronavirus cases registered on US Navy ships at sea.

On Thursday, The New York Times reported that the US had become the country with the highest number of confirmed COVID-19 cases, surpassing China, where the virus originally broke out in late 2019.

President Donald Trump attributed the spike to increased testing for the virus, referring to “tremendous numbers of people” who undergo COVID-19 tests on a daily basis