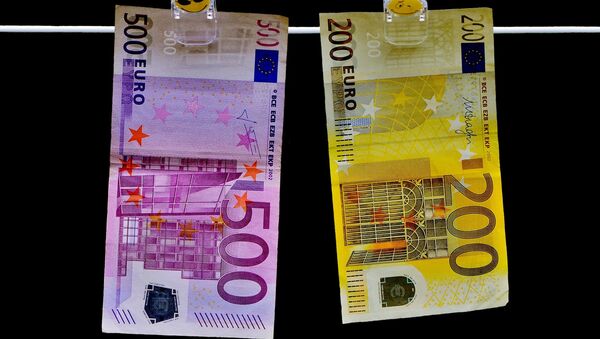 BRUSSELS (Sputnik) - The coronavirus pandemic is now challenging the core European taboo under the European Treaty, the issuance of eurobonds, but as the situation becomes increasingly dramatic, EU member states are feeling the need for the strongest of medicine to get over the looming coronavirus-induced economic crisis.

On Thursday, the heads of European states held a teleconference organised by the European Council in an attempt to find solutions to avert an economic slump following the shutting down of Italy, Spain, and France's economies.

Mario Centeno, Portugal's finance minister and president of the Eurogroup, said that the main goal of Brussels in the wake of the COVID-19 crisis was to set up new "lines of defence" for the euro.

"Our aim is to add new lines of defence to the euro, preventing this economic crisis from morphing into a financial one. This is what will be at the #Eurogroup table this evening", he tweeted before the teleconference.

Our aim is to add new lines of defence to the euro, preventing this economic crisis from morphing into a financial one. This is what will be at the #Eurogroup table this evening pic.twitter.com/XwFA1aBHrL

At the same time, Paul De Grauwe, a professor of European political economy at the London School of Economics and one of the most respected economists in Europe, made a shocking declaration, saying he is "very pessimistic about the future of the euro", and that "the Eurozone might blow up".

Of course, European Commission President Ursula von der Leyen communicated the importance of the issue for all Europeans. She even conscientiously washed her hands on camera, humming Ludwig van Beethoven's "Ode to Joy", Europe's official anthem.

EU states now need to make decisions to inject enough liquidity in the market to save companies from bankruptcy and the domino effect it would trigger for banks if their loans are not reimbursed, as well as for a high number of small- and medium-sized enterprises and private consumption of citizens, whose revenues are dwindling even if they have not lost their jobs.

For the European Central Bank (ECB), its President Christine Lagarde has already announced a purchase of European bonds worth 750 billion euros ($837 billion) by the end of 2020, but according to many economists, the need is much greater, especially in the worst-hit countries like Italy and Spain, which are also the most indebted. Meanwhile, Germany, the Netherlands, and the Nordic member states still refuse to wipe out the very large legacy debt of these countries.

While European Commission President Ursula von der Leyen speaks of an "all for one" spirit, Germany and other countries that have always respected the Maastricht Treaty, like Austria, the Netherlands, and Luxembourg do not want to pay for those who did not follow the rules, run annual deficits above 3 percent, and have a consolidated debt of much more than the 60 percent allowable maximum.

The bad pupils in the class are Greece, which is a desperate case, but also Italy, Spain, Belgium, and even France who only adhered to the Maastricht criteria for two years after their implementation in 1992. 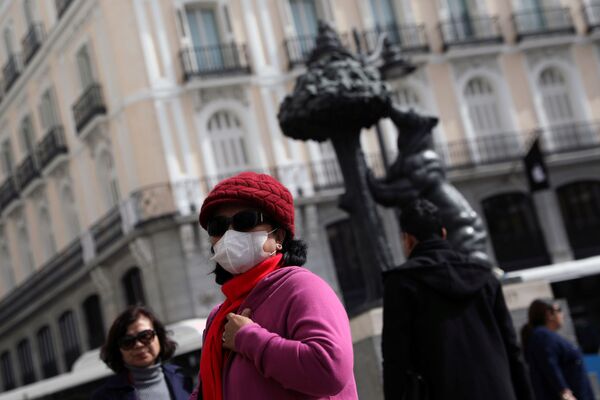 However, the current COVID-19 crisis seems to be so deep that a different type of agreement must be reached. According to Paul De Grauwe, Europeans must do everything to ensure that this temporary supply and demand shock will not have permanent consequences.

De Grauwe calls for a temporary unemployment benefit of 80-90 percent of gross wages and no bankruptcies to be declared during the confinement and post-confinement phases of the epidemic.

"The twin supply and demand shocks we are going through are likely to trigger many 'domino effects'. Companies with large fixed costs that suffer a sudden fall in income will quickly face financial difficulties or even bankruptcy. When that happens, the banks and other entities that have lent money to these companies will also be in trouble. A massive economic shock can lead to a banking crisis", de Grauwe said at a teleconference organised by the Centre for Economic Policy Research (CEPR), a think tank subsidised by the European Commission.

The economist stated that the crisis would affect not only businesses and banks, but would also pose fiscal risks to governments.

Do or Die: There's Only One Way for the EU to Avoid Breakup Amid COVID-19 Recession
"But the falling dominoes will not stop there. Governments could also face fiscal dangers when they step in to mitigate the crisis. In the case of the current pandemic, national governments will need to save businesses from bankruptcy by granting financial support and subsidies, assist workers by funding temporary unemployment schemes, and possibly even come to the rescue of large banks", he continued.

In contrast to the 2008 financial crisis, the initial shock is now coming from the real economy being hit by the COVID-19 pandemic, which requires national governments to intervene on a massive scale.

"We now see that the Maastricht idea that a country must keep its debt low in order to prepare for emergencies was a good thing after all. Italy or Spain are not in that situation and are now struggling", German economist Daniel Gros said at the CEPR conference.

Moreover, de Grauwe expressed concerns that the Eurozone could "blow up" if Europe does not show solidarity.

"The more their debt increases, the greater the risk that their bondholders will panic, as we saw during 2010-2012 sovereign debt crisis. And the countries experiencing the largest debt increase as a result of the coronacrisis — Italy, Spain, and France — are among the four largest eurozone economies. If Europe cannot show solidarity, the public resentment, the political backlash against the EU would be enormous, and I am afraid this would lead to a blow-up of the Eurozone", he said.

All European heads of state agree on one thing — there cannot be an unlimited guarantee for Italy's legacy public debt, which amounts to 132 percent of Italian GDP, even though it is not supposed to exceed 60 percent.

For some time, Italian economists, bankers, and academics have been toying with the idea of eurobonds implying that the bloc would issue eurobonds and indebt itself to inject liquidity into the countries that need direct financial help to avoid bankruptcies and irreparable damage to their economy. The ECB will be in charge of that.

Christine Lagarde announced the ECB's readiness to buy up distressed governments’ bonds through its programme, Outright Monetary Transactions, which was tested during the 2010 financial crisis, but this time without any strings attached. 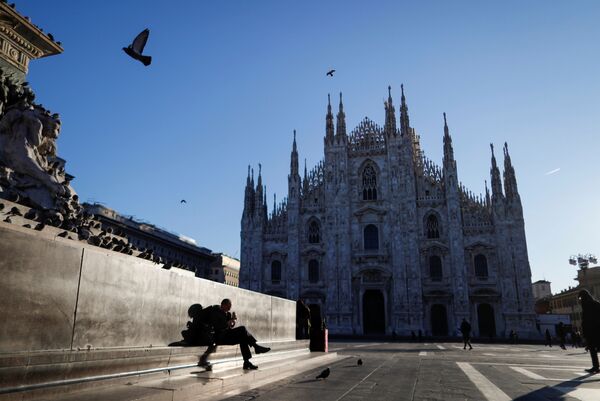 According to de Grauwe, the issuance of eurobonds is definitely needed in the current situation.

"This is an existential crisis, the issuance of eurobonds, which is the next step, is forbidden by the EU Treaty, but 'Salvus populi, suprema lex' ['the welfare of the people is the supreme law' in Latin], we need a massive issuance of eurobonds, otherwise this crisis would leave permanent legacy of unsustainable debt level, condemning these southern countries to decades of austerity. It would undermine the enthusiasm for Europe. I trust lawyers to come up with a creative solution for the member states to issue perpetual corona bonds, that would be bought a few years later by the ECB on the secondary market. It is time to set dogmas apart!" the economist explained.

According to Daniel Gros, European nations should "organise a direct transfer", not in the form of a loan, to the countries most severely hit by the pandemic.

"We must organise a direct transfer to the countries that are impacted by the asymmetric shock. Italy is the worst-hit and one of the countries with the highest debt. It should not be in the form of a loan, or a eurobond. With a direct transfer from the European budget, their existing debt would not increase and it would be a concrete sign of solidarity. It would not be paid back and would not be a debt such as a eurobond. It would not be taken out of the current EU budget, which would need to be adapted, and it would only affect Italy and Spain. In other words, it would not need a huge increase of the European budget which now represents some 1.2 percent of the European GDP", Gros stated.

Options on the... Screen

On 26 March, the 27 heads of state and government of the EU were supposed to meet again to negotiate a budget for 2021-2027 after failing to reach an agreement on 20 February. None of them could have imagined that one month later they would be discussing ways to respond to the most serious health crisis of the century via a videoconference.

Before the meeting with the council members, President of the European Council Charles Michel and European Commission chief von der Leyen participated in a G20 leaders’ videoconference called by Saudi Arabia, who currently holds the G20 presidency.

Italy to Allocate Additional 25 Billion Euros to Fight Coronavirus - Conte
Given that Europe is currently one of the epicentres of the global COVID-19 crisis, Michel and von der Leyen thanked all the G20 leaders for the solidarity shown toward the European Union and its member states most affected by the crisis. They also underlined that the bloc is committed to international cooperation in curbing this pandemic and will continue to assist vulnerable countries and communities around the world, especially in Africa.

The presidents of the council and the commission stressed that unprecedented events required unprecedented action and that fast, massive, and coordinated global action was necessary on the health and economic fronts to save lives and avoid a further economic crisis.

As for economic measures, the EU admitted having been late in perceiving the importance of the COVID-19 crisis.

Starting Monday, all member states were given permission to spend as much as they wanted over the 3 percent budget deficit limit.