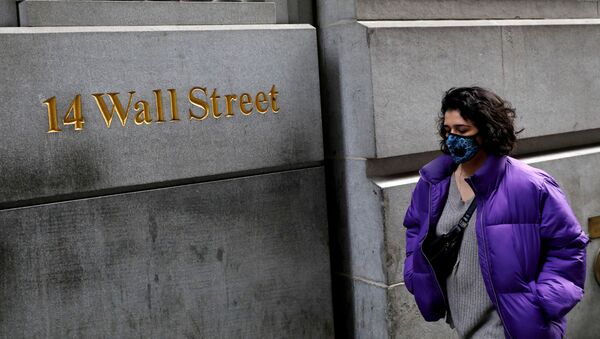 © REUTERS / Andrew Kelly
Subscribe
With cases and deaths related to the COVID-19 novel coronavirus drastically increasing in the US daily and unemployment rates soaring, it’s difficult to determine when the country is likely to recover. What is certain, however, is that the federal government’s stimulus is lacking, and those who need it most will suffer the most.

Kumi Smith, assistant professor in the Division of Epidemiology and Community Health at the University of Minnesota, joined Radio Sputnik’s Political Misfits on Friday to relate social and economic factors in the US to the spread of the novel coronavirus.

Smith noted to hosts Bob Schlehuber and Jamarl Thomas that we now know that the novel coronavirus is somewhere between “three and 35 times more deadly than the seasonal flu,” and one’s risk level may be higher due to age, immune system strength and other health factors.

Nevertheless, people of all ages have been diagnosed with the coronavirus in the US - which on Friday became the first country in the world to report more than 100,000 confirmed COVID-19 cases.

I don’t often ask for prayer on here, but my friend Laura from NYC has COVID-19. She has double pneumonia and is in ICU on a ventilator fighting for her life right now. She is only 30. Please pray for her.

“We are segregated to some extent, but we’re also incredibly connected, which I think is increasingly dawning on even the casual consumer of this news,” Smith said.

While it’s clear that those of all backgrounds are susceptible to the contagious disease, it still appears that only those within a certain class are guaranteed to actually receive tests to confirm their condition.

Referencing this common perception, Smith highlighted that “just the way that social determinants of health affect who’s healthy and who’s not, it’s similar with testing.” Unfortunately, she added, we will probably not learn the full scope of this public health inequality until we have gotten past the pandemic and can produce data on those who died.

In addition to the lack of access to COVID-19 testing, those of lower economic classes will also have difficulty adhering to stay-home orders, movement restrictions and other guidance from multiple levels of government due to the fact that they have to secure an income.

“We also know that folks like that have more underlying health conditions,” Smith pointed out.

Despite US President Donald Trump’s Friday signing of the $2.2 trillion COVID-19 relief package, it’s unlikely that even those who qualify for the full $1,200 cash payment as a single individual will be able to put it toward anything but bills - which would more than likely be past due by the time the funds arrive. This is especially likely, considering the fact that a record 3.3 million Americans recently filed for unemployment benefits in a single week.

Smith said that looking back on the crisis, she believes the best plan of action for governments fighting a pandemic would be to prepare more tests and develop a containment strategy early on.