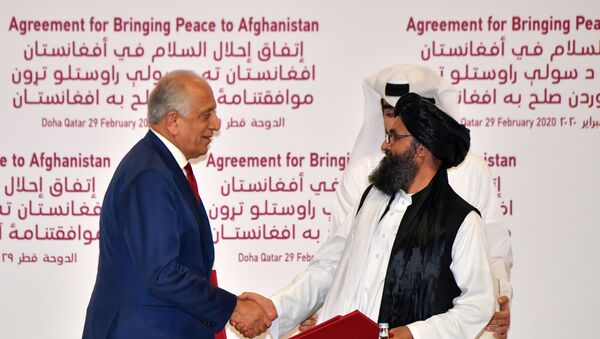 © AFP 2023 / GIUSEPPE CACACE
Subscribe
International
India
Africa
KABUL (Sputnik) - The Taliban* have rejected the Afghan government’s negotiation team, claiming that the list of negotiators goes sideways with the previous agreement between the Taliban and the United States, the movement’s spokesman Zabihullah Mujahid said in a statement on Saturday.

"But as the team is announced by the Kabul administration it thus violates our principled policy and the agreement concluded with America", Mujahid said.

According to the Taliban’s spokesman, the team should represent all sides accordingly in order to achieve peace in Afghanistan and eliminate all obstacles for intra-Afghan talks. Moreover, Mujahid reaffirmed the Taliban’s willingness to participate in the talks "with all influential Afghan sides in line with the agreement".

Clashes occurred between the Afghan National Police and the Taliban terrorist group overnight Saturday in the Spin Buldak district of the southern Kandahar province of Afghanistan near the border with Pakistan.

A security source said the clashes took place in the Sargo area of Spin Buldak, leaving six Taliban killed and seven others injured.

According to a civilian source, four policemen were also injured in the clash.

World
US Secretary of State Pompeo Reportedly Plans Meeting With Taliban Officials in Doha
On Thursday, Javid Faisal, the spokesman for the National Security Council announced that 100 Taliban prisoners would be released by 31 March.

On 29 February, the US and the Taliban agreed to a peace deal in the Qatari capital of Doha, according to which the intra-Afghan negotiation was scheduled to begin on 10 March. Nonetheless, the power crisis between Afghan President Ashraf Ghani and his political rival, Abdullah Abdullah, who refuses to concede his defeat in the presidential election, as well as Kabul's reluctance to exchange prisoners with the Taliban, resulted in a standstill in the peace process.