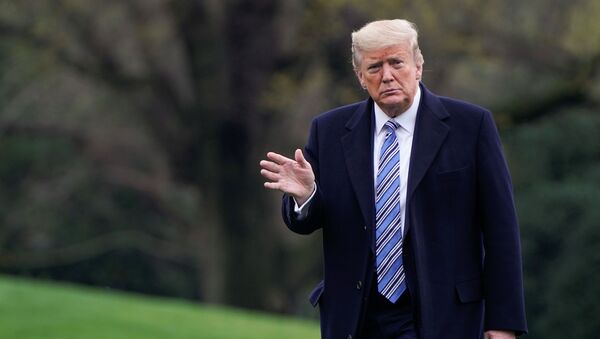 The US president earlier suggested that he might quarantine the three states in an attempt to slow the spread of the deadly coronavirus pandemic.

The CDC has released a statement in which residents of New York, New Jersey, and Connecticut are urged not to travel for 14 days. In a travel advisory posted on the site the agency elaborates that the warning will not apply to employees of "critical infrastructure industries" such as trucking, public health, financial services, and food supply.

Earlier, US President Donald Trump, while acknowledging that no quarantine would be necessary for New York, New Jersey, and Connecticut, noted that he had ordered the CDC to issue a "strong travel advisory".

....Federal Government. A quarantine will not be necessary. Full details will be released by CDC tonight. Thank you!

Trump told reporters on Saturday that he was considering the idea of a quarantine for the three states, to which New York Governor Andrew Cuomo responded that he doubted a quarantine would be "legally enforceable" and noted it was unlikely that it would accomplish anything. Later on Saturday, Trump announced these plans on Twitter.

I am giving consideration to a QUARANTINE of developing “hot spots”, New York, New Jersey, and Connecticut. A decision will be made, one way or another, shortly.

The number of fatalities in New York, New Jersey, and Connecticut are 782, 140 and 32 respectively, according to the Johns Hopkins University Coronavirus Resource Centre.