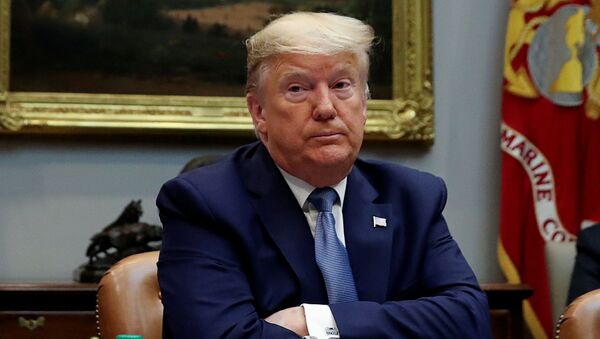 Ekaterina Blinova
All materialsWrite to the author
Rich Democratic donors, including George Soros, have thrown their weight behind super PACs' effort to lambast Donald Trump's handling of the COVID-19 outbreak. Vladimir Golstein, associate professor at Rhode Island's Brown University, foresees that the Dems will try to "milk" the crisis until November in order to undermine Trump's re-election bid.

On Monday, CNN reported that Priorities USA Action, the largest Democratic Party super PAC, is launching a $6 million ad campaign slamming President Donald Trump for his response to the coronavirus pandemic. Meanwhile, another Dem super PAC, PACRONYM, announced a similar campaign on 17 March, vowing to spend $5 million on it, according to The Washington Post.

For its part, The Washington Free Beacon notes that it is just a small portion of funds allocated by wealthy liberal donors, including George Soros, to "weaken" Trump. The media outlet highlights that this year Soros has already funneled $5 million to Priorities USA Action through his Democracy PAC which was created in July 2019 to serve as a hub for his 2020 race spending. For comparison's sake PACRONYM reportedly received just $250,000 from the Hungarian-born billionaire last year.

In February, the Democrats decided to shift from their impeachment failure to a new campaign targeting Trump's potential economic setbacks, according to Politico. At the time, the media outlet explained that while the Democratic camp had begun "to aggressively go after Trump’s track record on the economy" it couldn't decide "exactly how to message it". The coronavirus-driven recession has come in handy for them, according to Vladimir Golstein, associate professor at Brown University in Rhode Island.

Sputnik: What's your take on the Dems' recent anti-Trump effort? Is it politically correct to capitalise on the American people's fears amid the pandemic? Does the end justify the means in this case?

Vladimir Golstein: Democrats are doing the best they can to utilise this crisis in order to “soften” their target: President Trump. While the future of Trump is not certain, the current crisis has already had its first serious political victim: Senator Sanders, whose fall in the primaries was as spectacular as his rise just before the crisis began to unfold. Due to the restrictions on public gatherings, due to the general panic, and consistent drumbeat from Democratic leadership that, first, former Vice President Biden is a figure of stability and unity, and that, second, Senator Sanders is both too radical and too weak to beat Trump, Sanders began to lose dramatically.

Encouraged by their success with Sanders, the Democratic leadership clearly used fear-mongering to present the current medical crisis as the result of Trump’s profound inadequacies. Had all these events unfolded in the fall, Trump would have sunk as quickly as did Sanders, paving the way for Biden straight into White House.

The timing, however, proved somewhat premature. Consequently, Democrats intend to milk the crisis all the way to November. Thus, their persistent demands that the whole country comes to a standstill. All this presented as the desire to safe lives by quarantining the whole population, but the motives behind the scare-tactics are obvious.

Conversely, Trump originally erred on the other side, trying to diminish the dangers of the infection. Needless to say, Democrats immediately denounced Trump’s political motives, while keeping silent about their own. Now the issue has been expanded from the medical dimension into economics. The situation appears rather dire, millions apply for unemployment, the market sinks, and general gloom prevails. Trump’s attempts to get the economy back on track are greeted with condemnations and accusations of cruelty. Yet, it is clear, what is driving the Democrat Party's righteous anger.

An interesting situation emerges: while the educated and liberal class that does its job via computers, want the current quarantine to continue, since its loss of income is insignificant, Trump’s traditional supporters: both rich owners of various enterprises, and their blue-collar workers, want to get back to work. So as usual, economics will decide everything.

Sputnik: Is it ethical, in your view, to spend millions on anti-Trump political ads amid the coronavirus outbreak, instead of, for example, supporting those in need?

Vladimir Golstein: As they say, “all fair in love and war", and there is no doubt that Democrats view Trump as their enemy. It is naïve to expect political parties to abstain from politicking. Where Democrats seem to have miscalculated, however, is in the power and decisiveness of Trump. As the president of the most powerful and wealthy country in the world, he has endless means at his disposal. I am sure that he’ll do everything he can to get the economy back on track, and to solve the medical crisis before the summer ends. In my estimation, Democrats will come to regret their decision to sink Sanders – the only candidate who could have unseated Trump in November.

Sputnik: What do you think about the US liberal MSM coverage of Donald Trump's handling of the crisis?

Vladimir Golstein: I try to avoid mass media in the United States, since it is so politicised that it is not worth the effort to read through endless barbs and accusations. However, just a brief look at the articles carried by liberal publications, such as the Huffington Post, for example, conveys just one message: Trump is not qualified, Trump is not ready, Trump is dangerous, Trump is wrong.

Fox News is the only cable news network to cover President Donald Trump's signing of the $2.2 trillion coronavirus stimulus bill

CNN and MSNBC are refusing to air his remarks where he describes what his administration has done to help American families and the economy pic.twitter.com/w4JkzebKLl

​Needless to say, all these innuendos are given under the pretext of covering the COVID-19 news, and therefore accompanied by the pictures of hospital doctors, suffering patients, and so on. This is a typical title: "I'm An ER Doctor In NYC. Trump's Coronavirus Plan Isn't Just Dangerous, It's Deadly".

Such Fake reporting by the @nytimes, @washingtonpost, @CNN & others. They use a small portion of a sentence out of a full paragraph in order to demean. They really are corrupt and disgusting. No wonder the media is, according to polls, record setting low & untrusted. #MAGA

​There is no doubt that Trump’s handling of the crisis, and on a more serious level, his handling of the public investment in hospitals and medicine, has been inadequate. But the same can be said about his critics, the Democratic leadership, that did the best they could to neutralise Bernie Sanders, even though he was one of the few candidates who consistently arguing for the overhaul of the medical system. So the criticism of Democrats, who constantly vote to give billions to military and nothing for medicine, seems to be highly disingenuous and opportunistic.

The virus is a serious issue in itself, and even more serious in what it tells us about the bankruptcy of neoliberalism, and the collapse of the post-Cold War world order. We need some professionals writing about the former, and some thoughtful economists to write about the latter when dust settles. What we don't need is the highly partisan mass media, which uses any opportunity to report on the coronavirus to blame Trump for his failures, greed, and corruption.