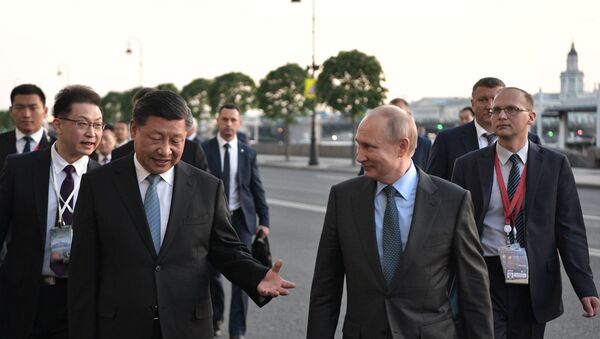 © Sputnik / Alexey Nikosky
/
Go to the photo bank
Subscribe
Ekaterina Blinova
All materialsWrite to the author
The South American continent which has been engulfed by public protests since last year is now bracing for the Covid-19 pandemic. Professor Heinz Dieterich has given his prognosis on how the coronavirus outbreak may affect the balance of power in Latin America.

The number of confirmed Covid-19 cases in Latin America and the Caribbean is rapidly mounting with Brazil, Chile and Ecuador being so far the most exposed countries to the disease. To thwart the spread, states are introducing urgent quarantine measures including total lockdowns.

No Latin American State is Prepared for COVID-19, Except Cuba

According to Dr Heinz Dieterich, director of the Center for Transition Sciences (CTS) at Autonomous Metropolitan University, Mexico City, and coordinator at the World Advanced Research Project (WARP), no Latin American country is prepared to deal with the pandemic, except Cuba.

"While public health care is in shatters, the 21st century health care is private and for the rich", Dieterich notes. "Furthermore, up to 60% of the people live off the informal economy and have very precarious living conditions. In Rio de Janeiro, for example, about 1.5 million people, that is 25% of the population lives in crowded and unhealthy conditions in slums (favelas). No popular organisation, very low education levels and a lack of civic education complete the disastrous picture".

Though Brazilian President Jair Bolsonaro is continuing to downplay the threat of the Covid-19 outbreak, the country has reported over 2,433 confirmed infections and 57 deaths, as of 26 March, according to the World Health Organisation (WHO). Since last week Brazilians have been protesting against Bolsonaro's handing of the the coronavirus crisis by banging their pots and pans together on balconies.

​In contrast, Cuba is not only keeping the virus under control but is also providing healthcare assistance globally. Cuban doctors were among the first responders to help the Chinese in Wuhan; they were also dispatched to Italy, Jamaica, Venezuela, Nicaragua and many other countries.

Cuban medical team arrives in St. Vincent and the Grenadines to fight against the coronavirus, flown on Venezuelan state airline Conviasa, and with support from Banco del Alba. @ComradeRalph pic.twitter.com/lrKIo0Zdj4

​Even the Bolsonaro government that had previously terminated medical licenses of thousands of Cuban doctors is now considering backpedalling on its decision.

​According to Dieterich, the credit goes to Fidel Castro who made healthcare the country's national priority several decades ago.

"In the 1980s, Fidel hedged a new strategic idea for the future: convert Cuba from an agricultural mono-export economy (sugar) into a global high tech medical hub", the professor recollects. "Enormous medical and biological research and production installations were built and a country-wide education system for physicians, nurses and technicians was developed".

Dieterich predicts that a lot of Latin American countries are likely to repeat the Spanish and Italian scenarios of the Covid-19 epidemic; for its part, Cuba will follow China's suit by implementing strict and coordinated measures. The island country registered its first three Covid-19 cases on 11 March. As of 27 March, it has 67 confirmed cases and one death.

Political Struggle Not Over, Just Put on Pause

The pandemic erupted while a number of Latin American states were in the midst of internal political struggle. Still, Dieterich believes that the disease spread won’t in any way calm the crises down: it will only freeze them.

Because of the coronavirus outbreak La Paz indefinitely postponed Bolivian elections. Initially the vote was scheduled for 3 May following the de facto November coup endorsed by the US.

"That provides a phase of accumulation of forces; for the subversives who carried out the coup d´etat against Evo [Morales], as well as for Evo´s party Movement Towards Socialism (MAS)", he presumes. "But it doesn´t change the basic equation. MAS will win the next elections, but will not be able to govern, because it will be sabotaged by the right and Washington", the academic explains.

We discussed the legitimacy of the elections, COVID19, economic policy and what could've been done to prevent the coup.
Full interview: https://t.co/IIGxudSOAY pic.twitter.com/wcnQRRwfoU

​For their part, Chileans who have been protesting for several months won’t be able to cast their ballots in a preplanned referendum on the country's constitution. While protests have been put on pause in Chile "there will be no real change in the power situation" in the country, the professor deems, calling the Chilean government "an oligarchic dictatorial regime".

How COVID-19 Affects the US' Monroe Doctrine

Meanwhile, the good news is that Washington is likely to stop interfering in the continent's affairs in the near future, according to Dieterich: "[It] will be absorbed until November by the internal electoral struggle between the two fractions of the power elite – the Democrats and the Republicans".

"It has also suffered a tremendous worldwide loss of prestige and political capital – similar to the inept Europeans — because of its incapacity to handle the pandemic", the professor opines. "Thus, Washington is in a bad position to expand in the region. On the other hand, it doesn´t need to, because all the social-democratic regimes of the last two decades have been removed already".

On the other hand, China and Russia's influence in the continent may increase, as Beijing and Moscow are emerging as "winners in the global soft power" battle, the academic notes.

This week Russia, China and Cuba have sent medical equipment and sent their healthcare specialists to Italy, the country that is facing the world's second largest COVID-19 outbreak. Meanwhile, a number of Latin American states have requested Russia to supply them with mobile anti-infection units, according to the Proekt-Technika Corporation, the manufacturer of the mobile hospitals. For its part, the People's Republic of China is offering masks, gloves, thermometers and protective suits to the countries of the region.

To date, China and Russia have already provided much-needed medical aid to many states struggling with the disease, the professor points out, dubbing the initiative a "global health Silk Road".

000000
Popular comments
America only views South America. As a source of cheap $2-00 per hour vassal slaves. Plus a place where all resources can be stolen for five cents in the worthless US air dollar.

treesidesSQ
28 March 2020, 07:26 GMT8
000000
It is good to see and notice that Russia, China and Cuba bring a Peace full revolution to the World Without spending Trillions on arms and army's like the terror state Usa and let there own people DIE !!!